Roberto Alomar inducted into the Canadian Baseball Hall of Fame 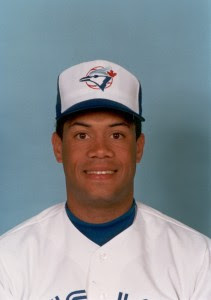 The best Toronto Blue Jay to ever wear the uniform


Catch the taste Robbie fresh off of being shafted by the untrustworthy Americans earlier in the month, headlines the class of 2010.  It is sad that our neighbors don't recognize a Hall of Famer when they see one.  We certainly do.

Here is the list of inductees he will join.  If you are thinking of maybe attending, here are all the details on how to get in touch with The Hall.  ROAD TRIP

Joining the duo of former Blue Jays will be a pair of Montrealers who will be enshrined posthumously.

Calvin Griffith, who began his 60 years in baseball as a batboy with the Washington Senators, had a brief minor league career and then re-joined the Senators front office. He took ownership of the team in 1955, moved them to Minneapolis in 1961, and owned the Twins until 1984. Griffith, who will be represented by his son Clark at the Induction Ceremony, passed away in 1999 at the age of 87.

Allan Roth, referred to as the "Father of Sabermetrics" by Bill James, was a pioneer in convincing teams to use baseball statistics as a tactic. After charting stats for his hometown Montreal Canadiens and the National Hockey League, Roth became the first full-time statistician to be hired by a major league club when Brooklyn Dodgers' president & general manager Branch Rickey hired him in 1947. Roth, who will be represented by his son Michael at the Induction Ceremony, died in 1992 at the age of 74.

"Quantrill, Griffith and Roth further demonstrate the often-underestimated impact that Canadians have had on so many facets of the baseball industry," said Ball Hall president & CEO Tom Valcke.

"And while we do not strive to be identified as the Expos/Blue Jays Hall of Fame, there is little doubt that the calibre of player that Robbie Alomar was during his time with the Jays penetrated every grass roots program from coast to coast and helped develop infielders. Being superb at his position made countless Canadian youth wish that they could play like Robbie Alomar, and that distinction is why we'll be honoring him here in St. Marys in June."

"This is an honour, truly a privilege," said an excited Alomar, who is currently in Toronto launching a clothing line called Second 2 None.

"I cherished my years with the Blue Jays and have always loved the Canadian people. Those years were the very best of my career."

Alomar, born February 5,1968 in Ponce, Puerto Rico, began his major league career with the San Diego Padres, arriving in the majors in 1988. He became part of one of the biggest trades in baseball history on December 5, 1990 when he and Joe Carter were sent to Toronto in return for 2008-CBHFM-inductee Tony Fernandez and Fred McGriff. Alomar, who played 17 years in all, went on to play for Baltimore, Cleveland, the New York Mets, Chicago White Sox, and Arizona, but his longest stint was in Toronto, where he led the Blue Jays to back-to-back World Series championships in 1992-93.

The slick-fielding second baseman was named to the All-Star Game all five years he played in Toronto, and 12 times in all. He also won five of his 10 Gold Glove awards and one of his four Silver Slugger awards while toiling for the Blue Jays. The 1992 ALCS MVP was named Blue Jays Player of the Year in 1991, '92 and '95, and later was named to their "Level of Excellence."

Alomar, who recently missed being inducted into Cooperstown by just eight votes, currently resides in Tampa, Florida with his wife Maria. He has an eight-year old son named Robertito.

"Baseball has been a huge and wonderful part of my family's life, so getting the call from St. Marys created a lot of excitement around our home," said Quantrill from his residence in Port Hope, Ontario.

"The Canadian Baseball Hall of Fame represents a community that has a true love and respect for our game. I hope my genuine enthusiasm and passion for a kid's game reflects well on the Hall. Thank you for the tremendous honour of representing our baseball community, and we can't wait to be in St. Marys with Robbie and representatives from the Griffith and Roth families this coming June."

Quantrill, born November 3, 1968 in London, Ontario attended the University of Wisconsin-Madison, and was originally drafted in the 26th round in 1986 by the Los Angeles Dodgers, and then again by the Boston Red Sox in the sixth round in 1989. The rubber-armed right-hander's first appearance was with the Red Sox on July 20, 1992, and his final game was on September 27, 2005 with the Florida Marlins. In between, he played for Philadelphia, Toronto (his longest stint with one team, from 1996-2001), Los Angeles, the New York Yankees, and San Diego.

Quantrill even toed the rubber for Team Canada during the 2006 inaugural World Baseball Classic. He also coached Team Canada in the 2009 WBC along with 2009-CBHFM-inductees Ernie Whitt, Larry Walker and Bernie Soulliere, and assisted Greg Hamilton with the Canadian Junior National Team as well.

Quantrill's only complete game happened to be a shutout, when the Red Sox rookie allowed only a single by Jay Buhner and a double by Mackey Sasser, both in the second inning, as he went on to strike out six in blanking the Seattle Mariners 6-0 on July 4, 1993.

"To be remembered a full decade after his death is a true honour for my father," said Clark Griffith from his home in Minneapolis.

"This is just fantastic news, and all of us our very proud that his legacy remains strong and will carry forward in St. Marys."

Born Calvin Robertson on December 1, 1911 in Montreal, brother of 2007-CBHFM-inductee Sherry Robertson, he was the nephew of Clark Griffith, a former major leaguer and owner of the Washington Senators. Calvin was from a poor family and when his natural father Jimmy Robertson died, Clark Griffith began raising Calvin and then adopted him in 1924. The youngster became a baseball junkie under his uncle's tutelage, and was known to have spent countless hours in the living room figuring out batting orders and farm team acquisitions to help the team as a youngster. Calvin played baseball and basketball at Staunton Military Academy from 1928 to 1933, and then baseball at George Washington University beginning in 1933. Following that, he managed in the minor leagues in Chattanooga and Charlotte from 1937 to 1941. He moved into several administrative positions throughout the organization, including secretary-treasurer and then vice president beginning in 1942. By the early 1950's, Calvin was basically running the Senators' day-to-day operations, and he was handed the ownership of the team after the senior Griffith's death in 1955.

Calvin Griffith was instrumental in bringing the club from Washington to Minneapolis in 1961, where he served 24 more years as president and principal owner of the Minnesota Twins. The Twins won three AL West titles under his reign (1965, '69, '70), one AL pennant (1965), and they hosted the MLB All-Star Game in 1965, the year that Calvin was awarded the AL's Executive of the Year award. He was inducted into the Twins' Hall of Fame in 2000, and the organization named the team MVP award after him. Canadian Justin Morneau won that award in 2006 and 2008. There are currently a row of seats in the Hubert H. Humphrey Metrodome named "Calvin's Seats," which are used to host underprivileged families at Twins home games.

When Carl Pohlad purchased the Twins for $38 million in 1984, Griffith cried at the signing of the agreement. He spent most of his final years in Minnesota, still attending Twins games and serving as an icon on the Minneapolis sports scene.

Both Calvin and his father were knows for some famous one-liners.

His father Clark, who is inducted in Cooperstown, once said about his Senators, "Fans like homeruns, and we have assembled a pitching staff to please our fans!"

Calvin was quoted saying "He'll either be the best manager in baseball, or the worst," after giving a young Billy Martin his first job as a manager.

But his sense of humour was hidden during contract negotiations. Pitcher Bert Blyleven offered this story about negotiating with Griffith. Agents were not a part of baseball at that time, so players had to negotiate with Griffith one on one.

"You would go into his office and he would sit in a high chair behind a high desk and you would sit on a couch that sank down, so it was like you were looking up about ten feet at this big owner. He would then basically tell you what you were going to make the next year, because that is what he thought you were worth, period."

Griffith passed away on October 20, 1999 in Melbourne, Florida. He was survived by his wife Belva, his son Clark, his daughters Corrin Pillsbury and Clare Griffith, his sister Mildren Cronin, and his brother Billy Robertson.

"My father's induction into the Canadian Baseball Hall of Fame is a great thrill for my mother, and a huge honour for our entire family, and we will be proud to participate in St. Marys" said Allan's son Michael from his home in Los Angeles.

"We are well aware that baseball has a very long and rich history in Canada. My dad was baseball's pre-eminent statistician, working with the Brooklyn and LA Dodgers, but he originally fell in love with baseball as a child in Montreal and enjoyed seeing the Royals when he could. As a young man, he was thrilled watching the exploits of a young infielder named Jackie Robinson, and my father joined the Dodgers organization in 1947, the very same year that Jackie broke the colour barrier. My father then went on to a 45-year career working in Major League Baseball, but it all started in Canada."

Allan Roth, born in Montreal on May 10, 1917, made a pitch to Branch Rickey in 1944 that made the case for opinions such as on-base percentage being more important than batting average.

"And, wouldn't it help a manager to know, for example, that a certain batter hit .220 against right-handed pitchers and .300 against lefties?", Roth asked.

Rickey became intrigued, and his hiring of Roth in 1947 initiated a trend that has made the personal computer an essential element of an MLB clubhouse's paraphernalia.

Roth did stats for the Brooklyn and LA Dodgers until 1964 and developed the RBI percentage (batting average with runners in scoring position). He charted every pitch and did the requisite calculations either in his head or with a simple calculator, insisting on working by hand throughout his career. He began working the NBC and ABC games of the week until 1990, feeding pertinent information to the broadcasters in the booth such as Al Michaels.

"Long before there was Mary Poppins, there was Allan Roth," said the legendary Vin Scully.

"If you had some question that came to you in the middle of a game, he would reach down into his bag and the next thing you knew, you'd have your answer. It was marvelous!"

Roth once said, "Baseball is a game of percentages; I try to find the actual percentage."

"Allan Roth was as vital to Branch Rickey as Robin was to Batman," said New York Times writer Alan Schwarz.

Still today, there remains a Los Angeles chapter of the Society for American Baseball Research (SABR) named after Allan Roth.
Posted by The Man With The Golden Arm at 2:13 AM