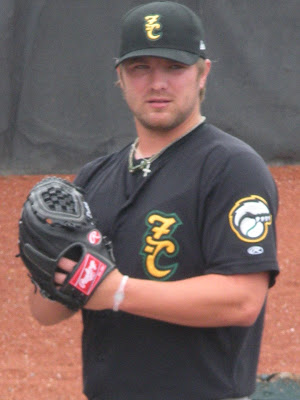 In his latest outing on Sunday in Trenton, prized Toronto pitching prospect Kyle Drabek held the Yankees Double A affiliate to 1 run and 3 hits over 6 innings to earn a win. The victory helped lock down a series victory for Drabek's New Hampshire Fisher Cats who overtook the Thunder for first place in the Eastern League's Eastern Division and gave New Hampshire their 65th win of the season, which topped their 2009 total.

It seems to many that Drabek, who was a 1st round draft selection by the Phillies in 2006 and was sent by Philadelphia to Toronto in the Roy Halladay trade last off-season, has nothing left to prove at the Double A level.

The son of former Cy Young Award winner Doug Drabek celebrated the nation's birthday in big time fashion, when he hurled a no-hitter against the New Britain Rock Cats on Independence Day in Manchester.

At two levels of the Phillies' system last year, Drabek posted a combined 12-3 record with a 3.19 ERA and 150 strike outs in 158 innings pitched before the Phils chose to trim down his work load and ended his season early.

Word has it around Toronto that the Blue Jays likely have a set innings limit for Drabek's season this year as well, which has led to him being pulled from his two most recent starts after 6 innings with a low pitch count in each game and minimal runs (1 total) allowed. Drabek suspects the Jays are protecting him the same way the Phillies did last season, but no one has addressed it with him directly. "No one's put a limit, yet, on how many innings I'm supposed to have. I know that last year (the Phillies) shut me down a month early because it was my first full season after Tommy John (surgery). So this year, maybe that's in the back of (the Blue Jays') minds, or they just want to keep my innings down to keep me healthy."

To continue reading the interview courtesy of our boy Jay Ballz click here.

Jay has also done a couple other interviews with Kyle.  You can find them here and here.
Posted by The Man With The Golden Arm at 12:05 AM