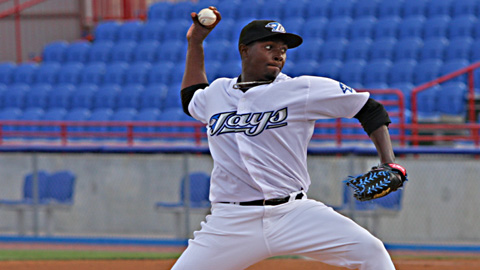 Joel Fernando (Decena) Carreno was signed as a non-drafted free agent out of San Cristobal, Dominican Republic, when he just 17 years old in 2004.

His 2010 season can only be described as massive. He smashed the Dunedin Blue Jays single season strikeout record with 173 and also broke the Florida State League record for strikeouts in a single game, when he whiffed 15 in July. For the year, his first in High A, Joel finished with some pretty impressive ratios for a starting pitcher:

After the 15 strike out performance MILB did up a nice article on his accomplishment. In it, Darold Knowles his pitching coach and 16-year Major League veteran said Carreno projects as a reliever at the higher levels.

Our boy Jesse spoke with Joel in the early 2009 season while he was still pitching with the Lansing Lugnuts. It turns out to be a particularly insightful interview due to the timing. Joel mentions that he only learned his now filthy slider a month prior and he already felt comfortable throwing it in all counts. They also talk about his knack for holding runners on base, his "light step" when he throws home and his quick feet when he attempts a pick off.

Posted by The Man With The Golden Arm at 1:05 AM