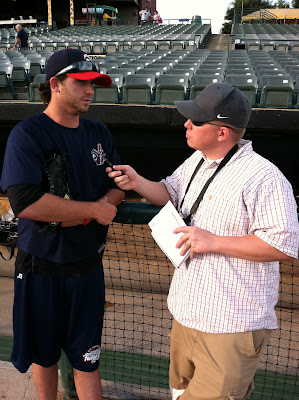 One of the fastest rising prospects across the minor leagues this season was Toronto's Drew Hutchison. The right-handed hurler began the 2011 season with the Class A Lansing Lugnuts and swiftly moved up two levels, landing with the Double-A New Hampshire Fisher Cats in August.

Combined at three levels this season, Hutchison posted a 14-5 record with a 2.53 ERA and a .220 batting average against.

Despite helping the Fisher Cats reach the Eastern League finals, which they eventually won, Hutchison, who threw 149 1/3 innings during the regular season, was shut down before the championship round. He was re-assigned to Dunedin, at that point, but stayed with New Hampshire as the team defeated Richmond 3 games to 1 to win its second ever EL title.

The Florida native was a 15th round draft pick in 2009. Hutchison, who stands 6 feet 2 inches tall and weighs 165 pounds, is expected to begin next season back with the Fisher Cats.

Prior to the postseason, I spoke with Drew about his pitch repertoire, his successful season and plenty more. Check out the media player below to hear the full interview.

Be sure to follow 1BlueJaysWay on Twitter for updates, stats and insight.
Posted by Jay Floyd at 1:45 PM