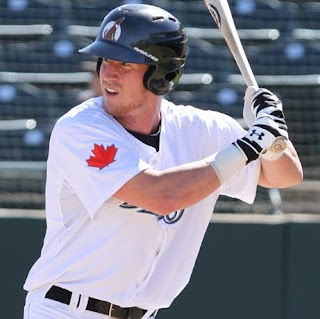 At age 26, Adam Loewen is in the midst of climbing toward his second big league career. Currently an outfielder with Toronto's Double A affiliate, the New Hampshire Fisher Cats, Loewen was once the top pitching prospect in the Orioles system and reached the Major Leagues as a starting pitcher. Faced with potential career threatening injuries, Loewen chose to convert himself to an everyday position player.

In 2002, the 18-year-old lefty Loewen became the highest Canadian draft pick in Major League Baseball history. At age 22, in 2006, Loewen was leading his native Canada in the inaugural World Baseball Classic, and holding American all-stars like Chipper Jones, Mark Teixeira and Derrek Lee hitless, while earning a win. Later that year he made his Major League debut with the Orioles.

By 2008, Loewen had appeared in 35 Major League games, posted an 8-8 record and had a 5.38 ERA. However, his pitching career would be cut short after suffering two stress fractures in his left elbow. Doctors inserted a 4 1/2" screw in the elbow to assist with the healing process of his first break in 2007. The healing did not go as expected and Loewen fractured his elbow again the following year. Once he was out of options, the Orioles released Loewen and he subsequently became a free agent. Looking for a home with which to restart his professional baseball career, this time as a hitter, and faced with a log jam of young outfielders in the Baltimore system, Loewen signed with Toronto after the Blue Jays contacted his agent.

The transition was an easy one for Loewen to decide upon, as the idea of becoming an everyday player was always in the back of his mind, throughout his first rise to the big leagues. "I always said to myself, if my arm blew out, or if I had a serious career threatening injury, that I'd want to come back as a hitter," Loewen said, in an exclusive interview with 1BlueJaysWay's Jay Ballz. "It happened, and I could still throw from the outfield. So, it was a blessing in disguise."

Loewen credits a lot of Blue Jays personnel, including Single A hitting coach Justin Mashore, for helping him reinvent himself as a baseball player. He also gives himself a helping of props. "I think really what it comes down to is, am I willing to stay in the cage for extra swings and keep working a lot harder than other guys, because I have a lot of ground to make up," Loewen proposed.

Last year, in his first season as a full time professional hitter, Loewen struggled. In 103 games at high A level Dunedin, he batted .236 with 4 homeruns and 31 RBI. After stepping up a level, this year, Loewen is showing that his hard work has paid off. Through his first 27 games with Double A New Hampshire, Loewen was batting .264 with 4 homers and 14 RBI. Loewen's average has slipped a bit in three games since then, going 1-for-11 in those match ups.

Toronto General Manager, Alex Anthopoulos, who signed Loewen to a two-year deal following the 2008 season, when Anthopoulos was Assistant GM, has stated on record that Loewen would likely need between 1,000-1,200 at bats before the organization might know if Loewen could become the next Rick Ankiel. Currently with the Royals, Ankiel had great difficulty throwing strikes, once he reached Majors as a pitcher with St. Louis in 2000. After those pitching struggles, Ankiel successfully converted himself to an outfielder and has become an everyday Major League hitter.

Loewen passed 710 plate appearances, since his conversion, this week, so the plateau where the Toronto brass could make an accurate assessment of Loewen's progress should come soon. Anthopoulos admits that, "Loewen has made great strides," and his statistical production this season will surely determine his future in the Toronto system.

Many players do not get the sort of second chance that Loewen is enjoying now and he's grateful for the chance to climb the ladder toward the Majors a second time. "I love playing everyday. I really do enjoy every minute of it, even when things aren't going my way," Loewen said. "I feel blessed for this opportunity to come back and play every day."

Reflecting back on his first stint in the big leagues, Loewen cites facing the Yankees as some of his most fond memories. "My first start was against Randy Johnson, at Camden Yards and I ended up getting a no decision. That was a really big thrill for me, to pitch against the Yankees and do well against them," Loewen said. Also worthy of note, Loewen was the very first pitcher in Major League history to face Cy Young Award winners in his first four starts, as, after Johnson, he was matched up against Tom Glavine and Roy Halladay twice.

As a native Canadian, Loewen followed the Blue Jays during his childhood. Possibly destined to focus himself on being an everyday position player, Loewen grew up admiring Ed Sprague, Paul Molitor and John Olerud. "I guess I kind of looked toward the hitters rather than the pitchers," Loewen said. "I didn't have really many favorite pitchers."
------------------------------
Jay Ballz runs PhoulBallz.com, a site that covers the Phillies organization, from the bottom to the top. He also has a weekly baseball segment on The Shore Sports Network in New Jersey. You can follow Jay on Twitter by clicking HERE.
Posted by Jay Floyd at 11:15 AM