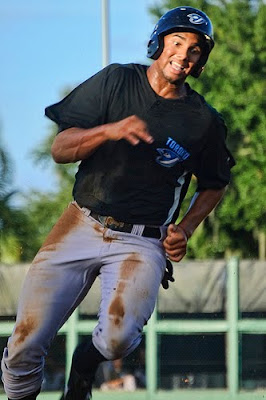 "Great body kid, he actually looks like (Alex) Rios physically," said Blue Jays scouting director Jon Lalonde at the time he was drafted. "Athletic, a bit of a project, he's going to take time in development and patience, but you can really dream on him. He's got a really high ceiling."

Our boy Jesse - who in all fairness has only been watching him for not even a week - says this:

First thing that occurs to me is athleticism.  I haven’t seen anything mind-blowingly awesome… but he’s 19, he’s growing, he’s fast, he’s got a quick bat, he works hard, he’s smart, he can play the outfield, he can throw… He’s very clearly the sort of player whose ceiling is really high.


That looks very encouraging and all but......

What if I now told you he is a Canadian boy from out West?