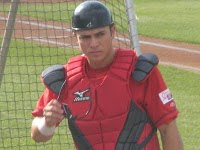 Blue Jays catching prospect Travis d'Arnaud was in Toronto recently to take part in team activities. It was d'Arnaud's first taste of Major League life north of the border. d'Arnaud, who will turn 22 years old next month, was acquired last off-season in the trade that sent Roy Halladay to Philadelphia. Injured for much of the 2010 season, d'Arnaud has been working hard to get healthy during the Autumn and Winter months.

We reached out to Travis last week for some quotes about his off-season. His thoughts on the team event and where his training and rehab work stands lies ahead. Check it out.


The format of the event in Toronto was pretty much like any day at the field. We had to show up around 7:30 am and breakfast was there for us. Each day from 9-10 was meetings from all of the front office staff for the Blue Jays. Then from 10-1 was a strength and conditioning program where we stretched, threw, ran and then worked out. After that we had lunch and attended more meetings from 1-2. After 2 we hit on the field from 2:15-3. After that we were allowed to go back to the hotel we were staying at and walked around the lovely town of Toronto.

My off-season program has been a very long process for me. Since I was injured last year, I had to go through vigorous physical therapy for two months in Laguna Hills, CA, with Randy Bauer. After that, I went to Fischersports in Arizona and rehabbed with Brett Fischer. Without either of those two men, I would still be in a lot pain. So for the past month I have been lifting lots of core and strength lifting such as squats, deadlifts, and push/pull lifts for upper body stuff. My main focus of all of my workouts was core. Now, I am in my "get in shape" phase of the off-season, where I lay off heavy weights and focus more on getting an ever stronger core and start my running, agility, and plyometrics. By the time spring training starts next month, I was to be in peak physical shape so my body can withstand a 140+ game season.