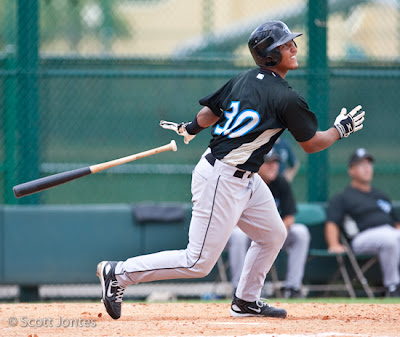 Image courtesy of MiLB In Focus

Our boy Jesse caught up with the all world catching prospect Carlos Perez this weekend and was kind enough to let us drop it here first, for you all to enjoy.

But before you do, check out his stats courtesy of First Inning. Feel free to get excited. I did.

Here's what Jesse had to say about Carlos after watching him for just 25 at bats:

Excellent line drive stroke, solid plate discipline, and a quick release to second base.  Easily recognizable as a terrific prospect.

In the interview itself you will gain some valuable insight on how people born in the Caribbean deal with "spring" in the Northern USA. Also, the MVP for his team the last three years reveals he grew up playing as an outfielder. He talks a little bit about being signed by the Blue Jays and how no other team was in on him as an 18 year old.

Now my math skills are not what I would consider strong but if he was drafted as an 18 year old and has managed to play full seasons in 2008, 2009 and 2010 then he can not be 20 years old right now. It`s just not possible, is it? His age is conveniently left blank in the stat table above and the always trustworthy Baseball Reference has him playing 2008 as a 17 year old. Which makes sense to me. But I'll admit I`m probably looking way a little too much into it.

If you are not following Jesse on Twitter for whatever reason, well, you should be. And while you're at it give Paul a follow.

Two rock solid guys traveling around with the Lugnuts all season.
Posted by The Man With The Golden Arm at 8:19 PM