The Chronicles of Vernon Wells 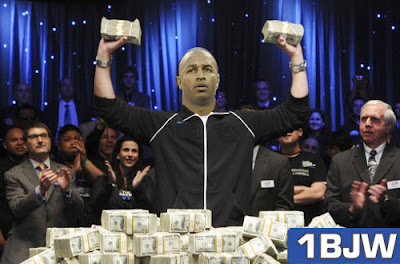 1:06AM: I just got home from work. Yeah it's Friday night, I know. But you see I work at an airport and it never closes. Like ever. I have been working there for over 10 years on shift, so I am wide awake and looking for some info. And I wanna get drunk.

1:10AM: Where to fucking start. V-Dub has been a Blue Jay his entire life. Drafted 5th overall in 1997. A lot of expectations when you go that high up. I remember him being referred to as having panache when he was in the Minors.

1:16AM: Gotta say my favorite interview is this one. Funny how he's trashing Aaron Hill who I believe takes over the title as longest serving Blue Jay.

1:21AM: Jeremy over at 500 Level Fan made a solid observation that Tony Fernandez will remain the career games played leader. Vernon would have passed him this season for certain.

1:29AM: Taking a look at those all time Blue Jay records. V-Dub lifetime .280 hitter. Impressive. Considering he leads in at bats. Tony still got him in hits. More impressive.

1:33AM: I still remember like it was yesterday Jerry Howarth saying "It seems like there has been a changing of the guard in centrefield as Vernon Wells has supplanted Jose Cruz Jr." That would have been in 2001.

1:48AM: Just responded to the comments. Sorta. Love you guys for participating.

1:50AM: BJH comes right out with the elephant in the room. Vernon's contract. Widely regarded as THE WORST in baseball and potentially all of pro sports. Check it courtesy of Cot's.
Vernon Wells of
7 years/$126M (2008-14)
1:53 Obviously in the AM


1:57 I met Vernon. Well as much as you can meet someone in an autograph session. It was the during winter he signed his mammoth deal. Jimmy Triggs scored the invite. I got a ball and my bat signed. I remember that I made a point of congratulating him on his deal. He responded with "Well I'm going to be here for a while". I have to say that at that moment in time I was uber happy with that being the case. As of about 7 hours ago, not so much. 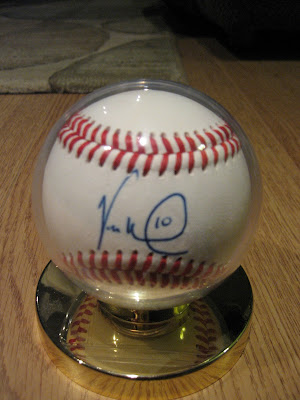 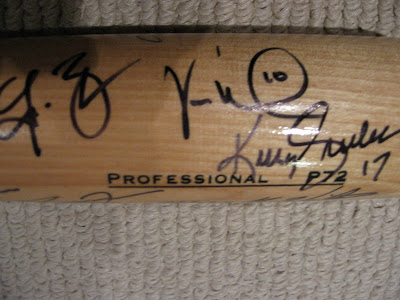 2:11 Zaunie and Gruber before you ask. Zaunie I got at the same autograph session as Vern. Gruber, well that's a whole different story.

2:18 Coors light tastes like water. And fuck the mountains.

2:25 Just looking at Vernon's contract again. Jesus. I wonder if he has to still donate $143,000 annually to Blue Jays charity. Good question. I'm sure he will.

2:28 Thinking about how he fits in with the Halos. Consider this: Torii Hunter moved to right field for this guy. I say Vernon plays LF. Should help him out quite a bit. That and the natural grass. I sincerely wish him well.

2:32 Starting to be concerned with the beer stock. It's not like I or anybody else knew that Vernon Wells and his immovable contract would be traded today when we got up. #silentassasin Hat tip to the BJH for the nickname. It fits.

2:41 Aren't all assassins silent? I mean it's still a total kick ass nickname for a Major League GM but isn't that part of the job description?

2:43 My hashtag didn't catch on. But I tried. It is important to repent your sins. I think all of us can honestly say we were a little to hard on Vern. Everyone except Navin. May the Vernon Wells Hatred Advisory System rest in peace.

2:51 Spell check and I are best friends.

2:58 Wondering how many bombs Vernon hit in the SkyDome.

3:08 Gonna look into the home run at home question. Stand by.

3:15 It must be said that Fangraphs is the shit. Vernon Wells home runs at home:
He also hit a homer in 2001 and 1999. Doesn't look like they happened at home. Therefore his total at his former home is 123.

3:23 One of the guys I worked with, who is a hockey fan, pointed out that trades don't really happen in the NHL anymore. Not like this. It was an interesting discussion trying to equate this trade in hockey terms. Just a thought.

3:35 Boy Wonder weighs in. Some people are saying he is the early favorite for executive of the year.

3:39 Kenny breaks the story. Of course he did. That is what he does. What up Span?

3:46 Napoli kills lefties. Wells does not.

3:47 More video. The Angels probably felt like they had to do this deal.

4:03 So I guess Rajai is gonna play CF. I have no issue with that at all. Dare I say it is an upgrade?

4:07 Bautista. My brain sees that video and yeah.....Bautista

4:08 What does this deal mean for Bautista?

4:11 For starters it means he will be the highest paid player on your Toronto Blue Jays 2011 edition whether he wins or loses his arbitration hearing.

4:14 I once traded Juan Rivera and Matt Thornton for Brendan Harris and Joakim Soria in a fantasy baseball league. Just saying.

4:19 I like this deal. Vernon Wells for Juan Rivera and Mike Napoli. It was rumored that $5 million went from the Jays to the Angels in the deal. Or not. Does it really matter?

4:31 Why the fuck didn't we ask for Brandon Wood as a throw in? Am I the only guy that thinks he needs some steady at bats? Could have been a solution at 3rd base.

4:32 I have started my 2011 Toronto Blue Jay defensive positions depth chart. Kinda lost in the OF without Vernon. I always thought he would eventually end up in RF but now he is gone. Completely gone. His contract, his stranglehold on CF.....I am a little perplexed.

4:42 Looking at the new 40 man roster. That's totally not helping at all. E5 and Lind listed as the DH. Napoli as a catcher and J-Bau still as an OF. Rommie Lewis got DFA'd to make room. Hope he sneaks through waivers, I like him.

4:43 The brain trust just traded Vernon Wells. It's starting to sink in. 4:45 Back to the defensive set up. I like Rivera in LF, Snider in RF, Bautista at 3B and Napoli as the back up catcher.

4:48 I think Adam Lind may be a platoon player next year. E5 and Napoli should be in the line up when anyone who throws with their left hand is pitching.

4:51 Wondering who the 4th OF will be if Bautista plays 3rd.

5:02 Fuck I'm not sure about anything. Expect that it's time for a smoke break.

5:07 Alright. The best thing that I can figure to do is run down the scenarios.

Preferred would be to keep Bautista happy which means right field. Based on that, I got:


RF Bautista
CF Davis
LF Snider
3B Lawrie or E5
SS Esco
2B Hill
1B Lind
C Arencibia
DH E5 if Lawrie makes the team. I hope he does. Napoli if he doesn't.

Posted by The Man With The Golden Arm at 1:09 AM