Take a stroll down memory lane with me, if you will. The date was April 20th 1984, and a young blond mullet sporting Texan had earned a roster spot on your Toronto Blue Jays. If you look at him, you know he likes to party. I mean, dude looks like that alcoholic chain smoker from high school who never grew up, or moved out of his home town. The same guy who is at the local bar every Friday night just talking about the time he went 4 for 5 with 8 RBI in that game against (Insert High School here) in front of a packed to the rafters stadium. He also looks like the type who may enjoy a "left handed cigarette" if you pick up what I'm laying down. Yes, Kelly Gruber holds a special place in the hearts and minds of Toronto sports fans, the way few others do. And I don't really understand why. I mean, Gruber could walk down the streets of Cleveland and no one would even recognize him. But in Toronto, if he shows up a bar near the SkyDome (yes I said it, SkyDome, not the fucking Rogers Centre) he draws quite a crowd. 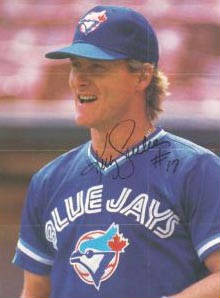 Flash forward to June 5th 2009. Toronto Blue Jays vs Kansas City Royals, Grienke vs Romero. Grienke was rolling at this point in the season with an ERA still under 2.00, but the Jays opened up a 7-0 lead going in the 7th inning. Grienke gave up 5 earned runs and only struck out three. This game was special because it honored the 1989 American League East Champion Toronto Blue Jays. And in attendance was most of the players from that team including Mr Kelly Gruber.

I tell you all this as a back drop for what happens later that night. Myself, The Man With The Golden Arm and two of our buddies, Ike Stake and Jimmy Triggs (names have been changes to protect the innocent), were at the Dome taking in the game. We were trying hard to heckle Grienke without mentioning the fact he has "trouble" with the public. Needless to say, we were into the brown pops and may have exceeded our limit. There may or may not be a video clip on youtube. I'm not telling you to go there or anything, but if you do, I never told you to look up a clip called Blue Jay Belly Top. It has nothing (everything) to do with this story.

After the game we stumble over to St Louis Bar and Grill for a nightcap. We meet up with some of our other friends who'd been at the game and order more alcohol and some food. I'm sitting in a chair next to Jimmy Triggs when another friend of ours Don Boon looks up and says "hey, that guy looks like Kelly Gruber." The only thing I remember after that is Jimmy leaping out of his chair, pushing me aside and running towards the mullet. It was in fact Kelly Gruber. So at this point, we're all trying to get our bearings about this, and it just so happened that we had brought a couple of baseballs to have signed at the game. We quickly ran to Don Boon's condo to pick them up. When we returned, Jimmy and Kelly had become friends. Gruber had been making his rounds around the bar, and Jimmy may or may not have kissed him at this point, but he was gracious and friendly. He was into the beers with us and very talkative, much to the displeasure of his female handler, who was a bit worried about the touching of Gruber. I walk back to the table to grab my beer when I see Jimmy walk over to another table where Gruber is talking with another group of people. Jimmy rolls up behind him and grabs Gruber's ass. Not like in a 'hey, how's it going' but as if he was trying to finger his asshole. So, we start cracking up, and I gotta admit, Gruber was a great sport. I believe at one point Jimmy looks at Gruber and says "look at the hair, you gotta enjoy the pot!" So finally, Gruber is around our table and I walk over to present him with a baseball that I wanted him to sign. He looks down, shakes my hand says "of course", he had a little chit-chat and out of the corner of my eye I see Jimmy walk over. He reaches into Gruber's chest, and slowly begins to unbutton his shirt. Very calmly Jimmy grabs a permanent marker and begins to autograph Kelly Gruber's chest. Gruber looks at me, I look at him, we look at Jimmy, and he looks back at me and say "Is this your friend?" I said "yes of course." Gruber pauses, lets Jimmy finish, takes a look at the autograph that reads "Jimmy Triggs.", laughs and signs my baseball. 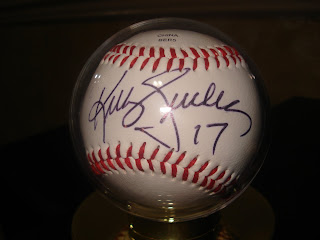 Needless to say Gruber was the rock star that night. After the permanent marker incident, we retired back to the table to discuss and laugh about what just took place. I'm not positive how the night ended but I believe we were kicked out of the bar. Kelly Gruber remains one of the most mediocre third baseman in MLB history, but he was funny and engaging and remarkable patient. He laughed at Jimmy signing his chest and made himself available for pictures and autographs all night. Maybe this is why he remains a fan favorite in Toronto, this city equates to the high school slugger who never left, this is where he can sit and reminisce about tagging Deion Sanders' foot on the tail end of the triple play that never happened, and everyone will sit and listen. This night however, not only did we sit and listen, we autographed his chest.
Posted by The Human Rain Delay at 8:12 PM

Labels: 1989 AL East Champs, Kelly Gruber, Remembering:, We like balls that are signed