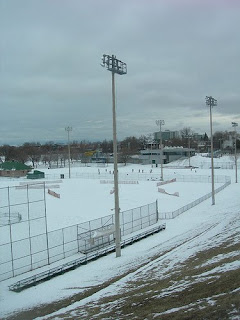 I was thinking about how your Toronto Blue Jays players are doing in the winter leagues when I came across this link.  Every player we have doing the winter ball thing can be found there.

Some highlights from the guys currently on the 40 man roster:

Jose Bautista played only three games and went 5 for 8 good for a .625 average.  Classic example of a small sample size.  No doubt this will be Cito's justification for hitting him lead off.

Randy Ruiz is killing both righties and lefties to the tune of a .341 batting average with 6 bombs in 88 at bats.  He also has a stolen base.  Must have been the back end of a double steal.....

For all the Lyle haters:  Brian Dopirak has 7 homers and 32 RBI, but his 40 strikeouts in only 137 at bats worries me a little.

Projected back up catcher Raul Chavez is hitting .238 and has grounded into 10 double plays in just 105 at bats.  That's about one twin killing every 2 games.....

Let's not talk about the pitching.  It's just better that way.

The guy I'm most excited for on this list BY FAR is named Darin Mastroianni.  He was selected in the 16th round (505th overall) of the 2007 amateur entry Draft.  Last season he split time between High A and Double A.  Darin managed to swipe 70 bases with a .398 on base percentage.  According to the team over at Jays Journal, he is our second best outfield prospect and is a legit defensive centre fielder.  I doubt he is ready to contribute in 2010 but he should start the year in Double A.  Keep an eye on him.
Posted by The Man With The Golden Arm at 10:19 PM