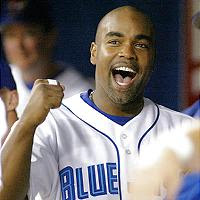 If you're reading this you, like me, probably get asked this question a lot: Who is your favorite Blue Jay of all time?  I guess most of you by now have probably got a response to that question.  For me, it's always such a tough one to answer.

I remember the dominating pitching performances I have had the pleasure of watching over the years.  The guys who took the ball in tough situations and won the big game for us.  Dave Stieb, Jack Morris, Dave Stewart, Pat Hentgen, Rocket Roger, Juan Guzman, Roy Halladay.  That doesn't even include the big money closers.

I think about the amazing speedsters we have had.  The type of guys who had the ability to disrupt the whole game just with their legs.  Alfredo Griffin, The Shaker, Rickey Henderson, Robbie Alomar, Mookie Wilson, Shannon Stewart, Otis Nixon.

How about some flat out jaw dropping defense?  The type of plays that only a hand full of people on the face of the planet can make.  Tony Fernandez, Robbie Alomar, Devon White, Juan Cruz Jr, Benito Santiago, O-Dog, Vernon Wells.

You can't possibly forget about the hitters.  I mean the pure hitters.  The guys who were born to do it.  George Bell, The Crime Dog, Dave Winfield, Paul Molitor, John Olerud, Robbie Alomar, Jose Canseco, Carlos Delgado.

What about the individual performances that stick out?  He might have just had a big game one day when you happen to be watching.  Kelly Gruber or Jeff Frye hitting for the cycle come to mind.  How about Joe Carter hitting a walk off home run at home to win the World Series.  Wow, if I was present for that moment in time, it would certainly be difficult not to pick him.

It could very well be your answer is simple.  Maybe you have always just loved that one guy.  For no reason in particular, just a textbook man crush.

I guess it really depends on what part of the game you like the most.  Anyone of the players mentioned above are acceptable answers based on your particular interest.  There really is no wrong answer.

For me, the answer to that question is as a result of an unreal game I had the opportunity to see at the SkyDome one day.  That day was Thursday, September 25th, 2003.  I remember it so clearly, so vividly, it really is like it happened yesterday.  Let me set the scene for you:

The season was winding down.  There were only four or five more games to play.  We were about 15 games out of a playoff spot and had been out of the race for a couple of weeks.  Garbage time.  Nothing to play for.  Tampa Bay was in town and they sucked at the time.  I mean they fucking sucked.  Their record was 61 - 98 and they were a whopping 37 and a half games out.  A good friend of mine Mr. Lucas Wood had the type of  job where he had access to tickets.  I remember he called me and told me his company gave him two seats but none of his clients wanted to go.  And neither did he.  So I gladly said I'd take em, naively thinking it would be no problem getting someone to go with me.  I called every single person I could think of.  I mean everyone.  Nobody gave a shit.  The Leafs were playing the Habs in a preseason tilt.  I was shocked.  I offered to pick people up and drive them home.  Nothing doing.  I still recall driving into the city on the Gardiner Expressway frantically calling people who worked or lived in the city to come to the game with me.  No one took me up on the offer of a free ticket.  They were good seats too. 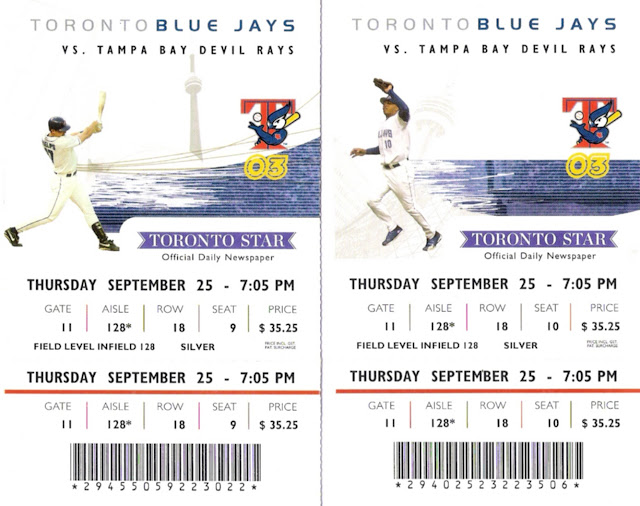 I gave up the search, parked the car and started my lonely walk to the Dome.  I couldn't heckle because I didn't have any back up.  I couldn't get wasted because I needed to drive home after.  I didn't have anyone to talk to during the game.  Christ, I couldn't even scalp the extra ticket and get some cash for it to buy some dinner.  Nobody was buying, certainly not singles.  Welcome to Loserville.....population: ME!

So there I am, alone, a few minutes before game time.  I stroll into an empty SkyDome, and decide to buy a program for 5 bucks just so I can at least score the game to keep myself busy.  Announced attendance was 13, 408 but honestly maybe half of that number was actually present.  I had an extra ticket remember and couldn't even give it away.  The roof was closed.  I sit down in a completely empty section and stretch right out.  It was the kind of game that only the true die hard fan like myself bothered to come and watch.  As a result I got to know the guy and his wife sitting in the row ahead of me quite well.  Misery loves company.

When I decide to score a baseball game, it is all business.  I make game notes, count pitch totals, record how many batters a pitcher faced in the inning before he was pulled, that kinda stuff.  I do not, under any circumstances, leave my seat.  I am there for the whole show so to speak.  As a matter of habit, I always choose one guy from the Blue Jays who I predict is going to have a big game and write his name in the line up in CAPS.  I don't know why I do this, it is just one of those things.  On this day for whatever reason, I selected Vernon WELLS.  I could never have guessed just how wrong one guy could be when I was writing in those batting orders.....

The contest featured heavyweights Pete Walker vs Jorge Sosa on the hill.  Our line up consisted of guys like Mike Bordick at short, Kevin Cash behind the dish and my buddy reigning AL Rookie of the Year Eric Hinske at third.  The game itself was a slugfest with both teams having the lead at different points in the game.

What I saw that day was a remarkable thing in retrospect.  The type of thing you don't realize how special it was until later, after you had a chance to let it soak in.  Carlos Delgado hit four home runs, in four consecutive at bats, his ONLY four at bats.  He was the fifth person in AL history and fifteenth in MLB history to accomplish that feat in a single game.  No one has done it in either league since.

I remember thinking to myself after he hit the second one to lead off the forth inning, man is he ever seeing the ball good today.  But it was the shot he hit off Windows to lead off the eight that really sticks out.  The drama was intense.  He already had three bombs, which in itself is rare.  I wondered out loud if they were going to pitch to him.  I figured that the hurler, one Lance Carter, was aware of the circumstances and probably didn't want to leave a ball over the middle of the plate.  I was so sure that Carlos wasn't even going to see a fastball in that at bat.  Whatever pitch it was, the sound the bat made when it came in contact with the ball, left no doubt in anyone's mind where it was heading.  I can still see him throwing the bat out of his hand, putting his head down and jogging to first.

That day I gave high fives to complete strangers. 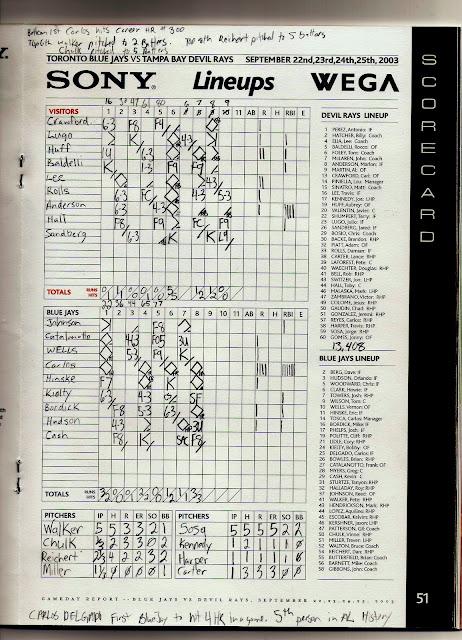 So what is my answer to the question: Who is your favorite Blue Jay of all time?  For me the conversation starts and ends with King Carlos.  He will always have a place in my heart because of that unbelievable day I witnessed Thursday September 25th 2003.

I know some days it is hard to be a fan of this game and this team.  We are a dying breed.  It would have been very easy for me not to go to that game considering the circumstances.  But the thought never entered my mind.  And on that day I was rewarded for my loyalty.  That is what it is all about.

Some video from the big game has surfaced. Check it.
Posted by The Man With The Golden Arm at 4:32 AM