A Message From Above 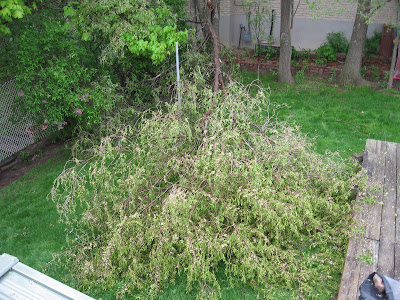 Missed the deck, the shed, both my neighbors house and my house 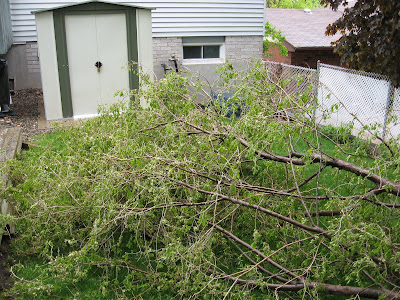 Call it a perfect shot 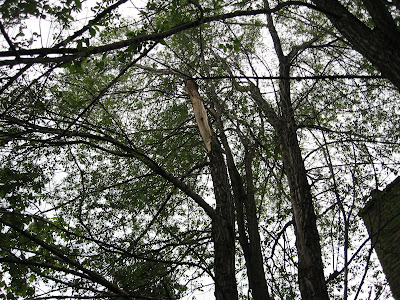 That right there is what I woke up and saw the morning after writing this knee jerk reaction post about the G20 clusterfuck.  A branch of a tree, a really tall one, broke off and fell about 40 feet down into my backyard.  Considering the rarity of such an event and the fact that the best possible outcome occurred, it got me thinking.

Maybe I might have overreacted a little bit on the whole canceling the series thing.  I was really looking forward to it and for so many different reasons.

First and foremost, if Halladay pitched, regardless of what was going on outside the Dome it was no doubt the game of the year.  I wanted to be there.  And you know what?  I was hoping we beat him.

Throw in the fact that there was talk of a scheduled double dip for like only the second time in the history of the SkyDome and you got yourself the place to be!  I was going to share it with you all on this site and was in the midst of setting up some deals with other sites to share it with them.....

I guess what I'm trying to say is I'm disappointed.  Here is the e-mail I sent to the ticket office:

I'm a little pissed off that this happened.  I even called you on Monday to see what was up and you told me everything was a go.  The next day the announcement comes?  Really?

I just want to know what the deal with the refund is.  I had 9 tickets which was almost half my flexpack.  I probably wouldn't have bothered buying that many games had this information been public sooner.  I'm finding it very hard to believe that the Toronto Blue Jays organization didn't see this as a possibility from day one.

I'm extremely disappointed in this outcome.

The Man With The Golden Arm

I have not got a response yet but in fairness, I just sent it tonight.  Had to be a dick but in a non over the top kind of way.  If it all works out, I should have 9 free great tickets to any game this year and about $450 bucks back.  Not bad.  Not bad at all.

Plus I don't have to subject myself to all the shit that is going to happen in downtown Toronto when everyone of the entire world's fucking nutbag crazies show up in a tiny area.  Although secretly I think it would have been fun to watch and take pictures of the anarchy.

For the record:  I did not give up on our team.  I just needed a time out.  It never had anything to do with the boys on the field.  This is about the brain trust.  I seriously can't believe the way this was handled.  But what are you going to do?

In closing I do not believe in coincidence.  I guess you could blame it on the fact that I watched way to many episodes of Numb3rs.  That tree branch fell at that particular time for a reason.  I think I understand the message.
Posted by The Man With The Golden Arm at 3:37 AM