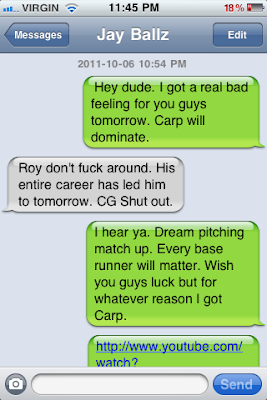 This is a text I sent our boy Jay - a ridiculously huge Phillies supporter - the eve before the winner take all Game 5 NLDS showdown involving former Blue Jay hero Roy Halladay and oft under appreciated Blue Jay Chris Carpenter.

It's not often I get these "visions" that pop into my head. They seem to be exclusive to sport and normally involve a huge underdog. The last one I can recall was way back in 2007.

My friends and I made the trip down to Columbus, Ohio for UFC 68. The main event featured heavyweight champ Tim Sylvia against Randy Couture. The Natural had been out of the fight game for a while and this was his comeback fight. Nobody in the world gave Randy a chance. Tim was at least a half foot taller and out weighted him by 50 pounds. Plus he was the reigning and defending champion.

As we made our way on foot to the stadium to watch the fight, I asked everyone in our party who they thought was going to win the main event. To a man, they all took the champ.

I told them about my "vision", which was a decisive Couture victory. Not only that but I mentioned that it was going to last all five and end in unanimous decision. I was laughed at. Repeatedly.

Since then, I have been waiting patiently for another one of these "visions" to come. I guess anyone can pick a huge underdog and be right, especially when it's a legit 50/50 bet. But the clarity and detail to which I was able to predict the result of that fight left my friends speechless.

Back to the Cards/Phillies match up.

Not exactly sure when this "vision" came. I believe it was that awkward time when lying in bed just before you fall asleep. I'll admit, this one was a little less detailed than the previous one. But I did see a gem and I did see the number 3.

The next time I get one of these "visions", I'm pulling out the wallet.
Posted by The Man With The Golden Arm at 1:31 PM