Whenever you hear the name Roberto Alomar  it's hard not to think about a moment from the 12 time All-Star's playing dominating days for us early during his hall of fame career.  The bomb he hit off Eck Sunday October 11, 1992 to tie the game in the top of the ninth in Oakland sticks out.  Your Toronto Blue Jays had been trying to beat the A's for years and couldn't do it.  We went on to win Game 4 in extra innings and took a three games to one lead in the American League Championship Series.  That was the TSN turning point, the momentum changer if you will, in our quest for the city's first World Series trophy.  In my opinion it was the second biggest homerun ever hit in team history.

Hearing his name for me personally, makes my mind wander back to the summer of 2008.  I remember it was July 28th, a regular Monday night not unlike any other.  My slopitch team, the Georgetown Goodtimers, were  scheduled to play our weekly game at 7:00pm in a very small town named Hornby located just off Steeles Avenue between Milton and Georgetown.  We always hated playing in this bandbox because the fences are short, the infield is never groomed and the light standards are low which makes picking up fly balls in the evening rather difficult.

I recall rolling into the parking lot and noticing a group of people loitering not far from the field.   I got out of my car, grabbed my gear and started to walk towards the diamond.  I glanced at the group of people in mid stride and thought to myself: hey, that guy right there looks a lot like Robbie Alomar.  Realizing immediately how far fetched of an idea it was that Robbie fucking Alomar was at a t-ball diamond in Hornby, I dismissed the notion completely and figured it was just the pre game festivities talking.  I continued my stroll to the bench and began preparing for the game.

As game time drew near, my teammates trickled in one by one.  Each and everyone of them saying that some guy by the parking lot looks like the ten time gold glove winner.  Then our leftfielder Mash arrived and  he was adamant that it was in fact the great Robbie Alomar.  Mash would routinely jog five kilometers one way to the games instead of drive,  so his mind was no doubt clear.

As the game began, we didn't care.  The questions were endless.....

Our shortstop and clean up hitter, Ike Zelek, was the first to gain the courage and went out to where he was.  He returned with a big smile on his face, confirming our thoughts that it was the four time silver slugger.  Jimmy Triggs, the team super utilityman/DH, by chance wore his Jays jersey to the game.  He instructed some of the player's wives to head over there and get him to sign it with his classic phrase "Catch the taste". 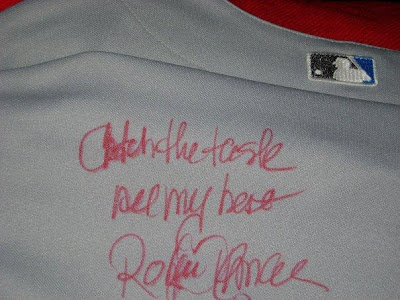 I remember thinking to myself that I had nothing worthy to be autographed.  I asked our team rep and equipment manager,  The Clamp, for a unused game ball and he told me he may have one in his car.  Lucky for me, he had one and I proceeded over to Robbie's group meekly with a red sharpie in hand.  The 1992 ALCS MVP was very engaging and had no problem signing the ugly, yellow, flight restricted ball.  I can remember my hand was trembling when I was passing him the ball and sharpie.  I was starstruck, this guy was truly my hero growing up.  I was completely unprepared to meet The Best Toronto Blue Jay to ever wear the uniform when I got up that morning.  Collecting myself somewhat, I then mustered up the balls to ask him how he was enjoying his time in the lovely town of Hornby.  This prompted a laugh from all, I shook his hand and thanked him for the memories.

Walking back to the diamond with my new treasure, I passed by Sammy in right field and begged him to let me keep it.  He laughed loudly at me and agreed, no doubt seeing that I would have not taken no for an answer. 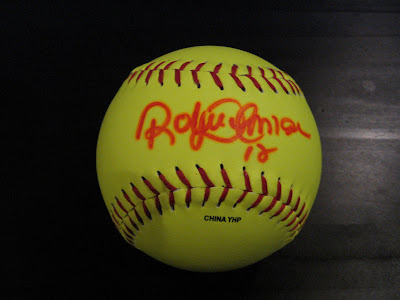 One final twist to this totally random story.  As it turns out a guy named Rob Alomar number 97 is on the roster of a Men's C team, in the Georgetown Slopitch League.  They played the 9 o'clock game that night.  Don't believe me?  Check for yourself here.

From this experience I learned one very important life lesson: Always have a new baseball on hand at all times.

For the record, I keep one still in the wrapper in my glove box and look forward to my next Blue Jay encounter.

Anyone out there have any chance meetings worth sharing?
Posted by The Man With The Golden Arm at 1:35 AM

Labels: Catch the taste Robbie, pre game festivities, Remembering:, The Best Toronto Blue Jay to ever wear the uniform, We like balls that are signed