First off thanks to Jordan Bastian and other season ticket holders for tweeting through out the event.

I've collected some tweets and I'll post my comments on them.

Cito, on new front office: "I see the same work habits as the people who were here when we won."
- Umm, great...thanks for the quote Cito...the front office feels the same as in the 90's. This has got to mean we'll win the division. This makes me feel muuuuch better about the 2010 Jays!

AA: If Jays hadn't made commitment to John Buck, they would've looked more seriously at bringing back Rod Barajas, who is still a FA.
- I bet that makes John feel all warm and fuzzy inside.

Damon News: The 2nd biggest story of the nite:

Anthopoulos: "I dont want to get your hopes up." But Jays have talked internally about Damon, esp with need at leadoff.
Jays have talked to Johnny Damon's agent. Will there be a second call to Boras on Damon? Anthopoulos: "It's very hard to say right now."
AA on saying Jays have talked about Damon: "I saw Jordan using his phone. I knew he was tweeting it. Let's see how many calls I missed." AA got phone out, had seven messages. "Hey, not my fault."
AA, on telling fans about Damon talks: "You guys will go on mlbtraderumors.com tonight and it'll be everywhere. I'll get hammered on it."
AA: "We've got Lyle Overbay at 1B and our priority would be to have Adam Lind as more of a DH. That's why a guy like Damon has come up."
That quote from AA was in relation to the Jays discussing Delgado. He'd have to be a DH -- the spot AA would prefer Lind to remain in.
- This tells me that the Boy Wonder checks 1 Blue Jays Way.  Boy Wonder make this happen! I'm all over this, I'd love to see this happen as I've posted in the past.

Anthopoulos: Marcum has no restrictions; McGowan moves to mound tomorrow. Trainers say McGowan "looks outstanding."
- This makes me excited. But now I read this again, how can he look "outstanding" if he isn't even throwing from the mound yet? Either way, like to see Chops back in the rotation.

Cito: "Closer is kind of up in the air. We have two or three guys down there that can do it."
- Annnnnd one or two guys might not be here by the start of the season.

Buck: "You werent supposed to notice that," when fan asked about new turf being installed in stadium.
- That's cool, we had Astroturf for 15 years and after 5 years of Fieldturf we're upgrading again. We looking to find something to slow the ball down a bit to help our defenders? 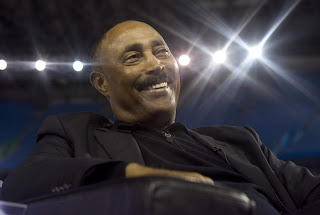 Cito was pretty much lobbying for a Delgado return to Toronto all night. AA has said in the past Delgado wasn't a fit. Kept neutral tonight.
Cito, on Delgado: "If there's some way to bring Carlos back here, I'd love to see him back here."
- Can't say I'm shocked by this one, Cito trying to get an old school Cito player. Plus it says, hey, I want Carlos and if you're upset we didn't get him, it's not MY fault.

But the truly biggest news to come out of the night is...

Fan asks Beeston why he's wearing socks - straying from his reputation. Lots of laughs.
- Beeston was wearing socks? Well what the hell does this mean for the season?

I kid of course about the Beeston thing, glad to see the event seemed light hearted and fun.
Posted by Nemesis Enforcer at 9:18 PM