New turf at the Dome 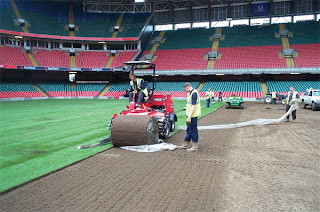 The cheap bastards @ Rogers are going to pony up for some new turf.

Hope they save some cash to sign their fucking high round draft picks this year.  Speaking of which: Why the fuck do we feel the need to tell everyone that we intend on spending 16 million US dollars on the draft this year?

If I recall, it was the Beeston and JP that made reference to going over slot before last years draft.....and how did that work out?  A week before the deadline to sign picks, JP does this interview saying stuff like "we're just waiting for them to accept."  How do you think a guy like super agent Scott Boras reacts to reading shit like that?


Beeston ends up feeling the need to explain why he couldn't sign three of his top four picks after they asked for to much money.  In doing so, James Paxton, represented by Boras, gets worked over by the NCAA for using an agent thereby breaking their rules.  He might be ineligible to pitch his senior year of college which starts in February.  There is talk he may have to pitch for an independent professional team if he loses his amateur status.  This potentially could affect his draft status.  Beeston's comments are the reason why the investigation was launched.

In short: The 2009 Amateur Draft, was and still is, a clusterfuck.  Poor management by the brain trust.  Hope we try to draft him again this year just to see what happens.

Is it worth noting that Paxton, our second pick at number 37 overall, is now being ranked inside the top ten picks in mock 2010 drafts?  I think it is.  We could have had a premium pick a year before it was a premium pick.  We said we were going to go over slot, we did go over slot but in the end we didn't want to go that far over slot.....
Posted by The Man With The Golden Arm at 12:19 AM