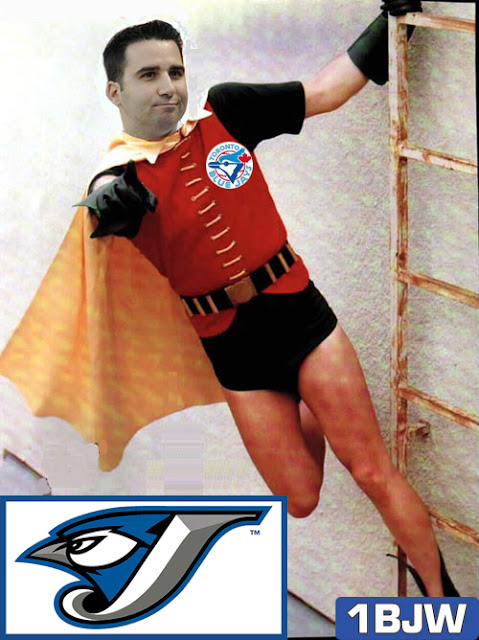 Boy Wonder does it AGAIN

A little before 10pm it was reported your Toronto Blue Jays declined the option(s) on closer Kevin Gregg, much to the dismay of the voters in our latest poll. Of the 18 votes cast 56% of them were in favor of keeping 3G around for another year. He had a buy out attached to his option for $750,000.

Then, even more unexpectedly.....

At 10:20pm the Jays make this press release:

The TORONTO BLUE JAYS have acquired C MIGUEL OLIVO from the Colorado Rockies in exchange for a player to be named or cash considerations.

The TORONTO BLUE JAYS have declined the 2011 option on C MIGUEL OLIVO, making him a free agent.

Olivo was a Blue Jay for an hour and a half at the cost of his buy out, which was $500,000. That is quite the hourly rate of pay! And it could go up if it was cash considerations going back the other way to the Rockies to complete the trade.


What we know right now:

We have 2 Type A free agents in relievers Jason Frasor and Scott Downs.

We have 3 Type B free agents in catchers John Buck, Miguel Olivo and reliever Kevin Gregg.

If you don`t know what the difference is click here.

Assuming we offer everyone of our free agents with compensation attached to them arbitration, they decline it and all sign a Major League contract with another team. Then we are looking at 5 sandwich picks between the first and the second round of next years draft as well as 2 extra 1st round picks. For now.

There are 33 picks in the first round and 18 of them are protected, meaning they cannot be lost if the team that owns them signs a Type A free agent. In that case they would surrender their 2nd round pick instead.

It is also worth noting that if a team (the fucking Yankees) signs more than one Type A, then their first round pick in the draft goes to the team losing the highest ranked Type A free agent. Currently Downs has a rating of 76.352 and Frasor comes in at 73.383.

All of this is really speculation until the next deadline which is November 23rd at midnight. That is when clubs have to decide whether or not to offer arbitration to their free agents.

Some other important deadlines are November 30 which is when players have to decide whether or not to accept arbitration and December 2nd which is the last day teams can tender a player a contract.

It's not until after this date do we get a true list of who is available this offseason and what their compensation will be.

It is probable that your Toronto Blue Jays will have 10 picks in the first 3 rounds of the 2011 Amateur Draft and possible that we get 8 of the top 50.

Keep building through the draft.

In Alex we trust.

Posted by The Man With The Golden Arm at 3:16 AM