Game 61 Recap: Live And In Effect 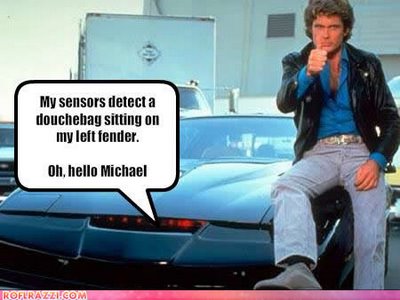 The Human Rain Delay, Jimmy Triggz, LastRow500's and me, The Man With The Golden Arm decided to brave the police state that is Toronto and head down to see King Albert live and in the flesh.  I left my house in Guelph at 2pm for a 7:07 start, expecting the worst.  You know what, it was a piece of cake.  Got the car parked, picked up the tickets from the box office and even got a seat at St. Louis Bar and Grill before 5pm.

Now I mentioned that King Albert was "a" reason why we braved the cops and fences to catch the game.  But in fact the real reason was because our boy Jesse was taking in the game and we wanted to meet this American friend of ours.  He did not disappoint, taking a half inning out of his busy schedule to sit and chat with us about baseball and life in general. 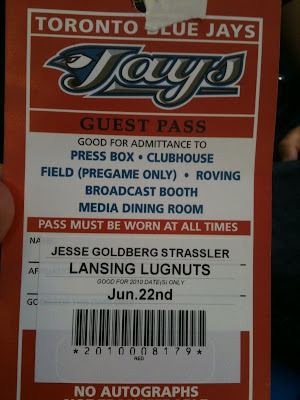 Jesse also got some time on the air, discussing all things prospect on Jays Talk.  He did forget to plug the blog but what are you gonna do?  Guess we could forgive him this one time.....

The game itself was pretty ugly.  King Albert went 0 for 4.  We lost 9 - 4 and it was #TweetingTuesday which I gotta tell you, is a fucking terrible promotion.  I got an idea: why don't the cheap bastards @ Rogers bring back twoonie Tuesdays instead?

J-Bau went deep twice to raise his Major League leading total to 20.  Hope he is coming out of that slump a little bit, considering we DFA'd E5 so that he play some 3 bag when Snider gets well.  I don't disagree with that move at all but I have E5 for 3 bucks in my big money AL only fantasy league and would have appreciated a phone call or something beforehand from the brain trust so that I could have traded his ass.  I don't know if he clears waivers or not but The Cito had this to say about the move:

Blue Jays manager Cito Gaston made it quite clear on Tuesday that 3B Edwin Encarnacion was not designated for assignment on Monday because of a lack of effort or hustle. "I never felt that way about Edwin," Gaston told MLB.com. "What you guys probably heard on the radio, I mean, we don't tell you guys who's knees are hurting them or who's legs are hurting, because then the opposition knows about it. Edwin, he's been beat up a little bit, sore in his legs and stuff, because he didn't have spring training. When guys don't run the ball out, sometimes it's got nothing to do with their effort. It's got something to do with we tell them to pull up. [The move had] nothing to do with that. If a guy's not running or playing up to what I think he should be doing, if he's healthy, then I will say something to him. So it's got nothing to do with that."

As for the game tonight, we got Ricky Romero (6-3 3.08 ERA) on the bump against former Jay Chris Carpenter (8-1 2.83 ERA).  Great pitching match up and one I will be happy to take in from the safety and comfort of my couch.
Posted by The Man With The Golden Arm at 5:48 PM