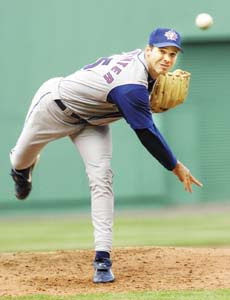 Chris Carpenter was drafted 15th overall in 1993 by your Toronto Blue Jays.  He pitched for us from 1997 to 2002.  He compiled a record of 49-50 with an ERA of 4.83.  He was the 2002 opening day starter for us in Boston.  In September, after a tough season in which he only made 13 starts, he had surgery to repair a torn labrum in his throwing shoulder.  A potential career ending injury for a pitcher, some pegged his chances as low as 25 percent to come back.  His rehabilitation was scheduled to take the entire 2003 season which would have been his final arbitration year before entering free agency.

What happened next depends on who you ask.  The details are a little sketchy in terms of facts.....

Some article says: Carpenter rejected a contract offer from the team and became a free agent.
I say: Service Time is the main reason why Carp is no longer in a Blue Jays uniform.  J.P. was trying to stop the clock on his service time so that he could hold onto him for another season.  To do that he needed to get Carp off the 40 man roster and avoid salary arbitration.  The only way to get that done was to outright him to the minors and hope he accept the assignment.  Had Carp signed any type of major league contract, he would have needed to be placed on the 60 day DL while he rehab his wing.  But he would have collected his treasured final year of service time and been granted free agency.  Which as it turns out is exactly what happened anyways.
Carpenter says: “They decided to let me go, and I didn’t know what was going to happen. I was in a sling and I didn’t think a whole a lot of teams would be interested in a pitcher with a sling on. Fortunately, there was.” 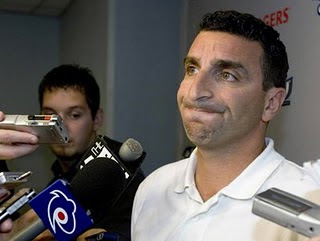 Don't let the door hit your ass on the way out sir.