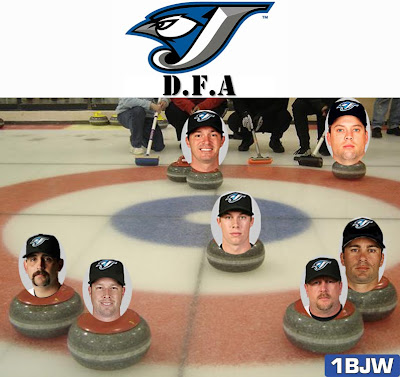 A curling reference?  It is winter up here.....

When dealing with their everyday player transactions, all major league baseball teams have the hammer.  They use it sparingly, most often in the offseason due to the overall higher volume of player movement.  During the season it is much more rare to see but it remains a viable option for the brain trust to consider when figuring out what to do with players in certain circumstances.

When a player is designated for assignment or D.F.A, he is immediately removed from his team's 40-man roster and within the next 10 days, traded, released or, if he clears waivers, assigned to the minor leagues.  Typically when a team decides to D.F.A a player, it is because they want to add a player to the 40-man roster via trade or free agent signing.  A club may not designate a player for assignment if the corresponding transaction is to recall a player on optional assignment.

After designating a player for assignment, the club must make one of the following contractual moves:
I will attempt to explain each in detail.  Please put on your thinking caps now:

1. Place the player on waivers

Normally when a player is placed on waivers, which can only be done within the first 7 days of the 10-day period after being D.F.A, it is for the purpose of outrighting him to one of the club's minor league teams.  For a team to assign a player to the minor leagues, he must first be exposed on irrevocable outright waivers, making him available to the other 29 clubs in reverse order of won-lost record.  If  the player is claimed, he is lost to the claiming team for $20,000.  Irrevocable waivers may not be reversed.  The claiming team pays the player the major league minimum, in 2009 it was $400,000, with his original team paying the balance of his salary.

If no one claims him, he can be released or outrighted to the minors.  A player who is outrighted to the minors is removed from the 40-man roster but is still paid according to the terms of his guaranteed major league contract.  A player may be assigned outright to the minors only once in his career without his permission. Thereafter, he may either 1) reject the assignment and become a free agent, or 2) accept the assignment and become a free agent at the end of the season if he’s not back on the 40-man roster.

Also, if a player has five or more full years of Major League Service Time, he must give his consent to be assigned to the minors.  If the player withholds consent, the team must either release him or keep him on the major league roster.  In either case, the player must continue to be paid under the terms of his contract.

Once a player is D.F.A, he may be traded. Some teams have been known to designate players for assignment to increase interest in the player, especially among teams that are not at the top of the list for waivers.  A club interested in acquiring a player who has been D.F.A may try to work out a trade before the player is placed on waivers thus eliminating the possibility he might be claimed by a club with a higher waiver claim priority.

Also, under the "five and ten rule," if a player has ten years of Major League Service Time, the last five with his current team, he cannot be traded without his consent.

If a player is not traded, and clears waivers, he may be released from the team. The player is then a free agent and may sign with any team, including the team that just released him. The team that releases him is responsible for the salary the player is owed, less what he is paid by the team that signs him. In practice, that amount is usually a pro-rated portion of the Major League minimum salary.

Notable Toronto Blue Jays that have been Designated For Assignment:

Matt Stairs:  He was D.F.A after the trade deadline had passed in 2008.  This move was done to clear a spot on the 40 man roster for Travis Snider.  By bringing out the hammer, we forced the eventual World Series champ Phillies who were in a race and didn't want Stairsy to be exposed on waivers,  to cough up a player to be named later.  That ended up being Fabio Castro.  He never made it past triple AAA for us and was signed this off season by the Red Sucks.

Russ Adams:  He was D.F.A after the Jays claimed T.J. Beam off waivers around this time of year last offseason.  He was not claimed on waivers and reported to the minors.  Later he was D.F.A again to make room for Dave Dellucci and subsequently released in July of 2009.  The hammer was brought out twice in one season.

Shea Hillenbrand:  He was D.F.A after a what can only be described as a shitshow right before the trade deadline in 2006.  It was reported that he wrote the famous "ship was sinking" comment on the chalkboard in the clubhouse which made the hammer come out swiftly.  A day later,  Hillenbrand and Vinnie Chulk were shipped off to the Giants in exchange for Jeremy Accardo.

Curtis Thigpen: He was D.F.A after the Jays claimed Brian Burres off waivers in February of 2009.  The catcher of the future passed through waivers and accepted his minor league assignment.  He was then signed to a minor league deal by the Jays on March 1st but was traded March 27th to Oakland for a player to be named later or cash.  We brought out the hammer to force him off the 40 man roster.

By all reports, Frank Thomas was not D.F.A and was given his outright release in April of 2008.  I guess we have to call that move the sledgehammer.
Posted by The Man With The Golden Arm at 12:22 AM