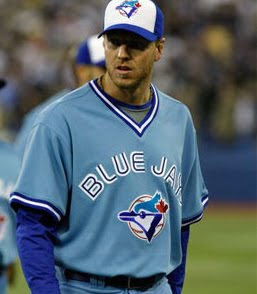 I think I'm ready to talk about the trade now.  I know it took a while.  I have no idea where this one is going to go but I hope you enjoy the ride.....

Your Toronto Blue Jays selected him the first round, 17th overall, in the 1995 MLB June Amateur Draft as an 18 year old.  He rocketed through the minor leagues, reaching AAA by 1997 and the Majors in 1998 as a 21 year old.  Things looked good.  At the time we had three young right handed pitchers who seemed destined for success.  They were Chris Carpenter, Kelvim Escobar and Roy Halladay.

But everything became unraveled.  Carp suffered some devastating arm injuries, Kelvim was bounced between the rotation and the bullpen and Doc got sent all the way back down to High A ball in 2001.  He was told he needed to completely change his pitching mechanics and find some consistency.  Instead of bitching and moaning like some of our current players did about being demoted, Doc went down and just did his work.  I'm sure he was bitterly disappointed but he never let anyone know about it.  By the end of 2001, he was back up in AAA.  He started 2002 on the major league roster and went 19 - 7 in 34 starts amassing 239.1 innings and received his first of six all star game nominations.  In 2003 he won his only Cy Young award.  His numbers were ridiculous for a modern day pitcher.  22 - 7 record, 266 innings, 36 starts, 9 complete games.  But the most amazing stat for me in that season was his walk totals.  That year he faced 1071 hitters and walked 32 of them.  Mind blowing stuff.

For his career he has 49 complete games in 287 starts, 15 of them shutouts.  17% of the time he took the ball, Doc finished what he started.  For me, the best part of any of his games was when the manager went out to the mound to talk to him for the first time in an inning.  Literally, a three second conversation ensued.  I can only imagine how it went, but if I had to guess:

Manager says, "Doc you look a little tired."
Doc replies, "What's tired?  Now go back to the dugout and let me get back to work."

I remember early in the 2008 season when he pitched four complete games in a row and remarkably we somehow managed to lose three of them.  I guess that sums up his career here in Toronto better than anything else I could ever say.

It was always a fast game when he was on the mound.  I figured it out that last year the average length of the games he started was 2 hours and 45 minutes.  Doc worked quickly, efficiently not wasting any time between pitches.  He pounded the strikezone, almost seeming to dare hitters to swing.  His focus was second to none and watching him set up his prey was an absolute treat for me being a former catcher.

"I want to throw a lot of innings, and I want to give the team a chance," Halladay said. "I try to be aggressive and pitch to contact."

And give us a chance to win you did sir.

Personally, I felt we were the best team in baseball every five days.  I truly did.  We never needed to score many runs with The Doctor on the mound and we usually didn't.  I remember more than once writing the dates he was projected to pitch in my calendar and trying to keep them free so I could watch the surgeon preform his work.

Doc was always a bright light in a sometimes (mostly) dark season.

Day in and day out, he took the ball and executed.  To me, the mark of an athletes greatness in any sport is how he preforms when he doesn't have his A material or "best stuff".  Anybody can be great some of the time.  Some guys are able to be great more than they are not.  Doc was good enough to win, even with this offense, when he didn't have command of all of his pitches.  Normally it was his curveball that would disappear, occasionally it was his cutter.  On those days, he was forced to battle hitters.  Jacking up the pitch count and refusing to give in.  It was still good enough to give us a chance to win.

Over the years, people here in Toronto seemed to take his brilliance for granted.  They must have assumed Doc would be a Blue Jay for life due to the fact he signed TWO under market value extensions to stay.  Always saying, I just want to win and by signing for less we can spend that money on other players.  The players union must have been pissed with his decision for obvious reasons but he still did it anyway.  A true team guy.  A lifelong Blue Jay.  But then it all changed.....

Last summer we began to hear rumblings that Doc may be available on the trade market.  J.P. was just throwing his name around in the media and making it seem like he wanted to leave.  Selfishly I didn't want to believe it.  Not Roy.  ANYBODY but Roy.  The fans reacted and quickly made their voices heard. 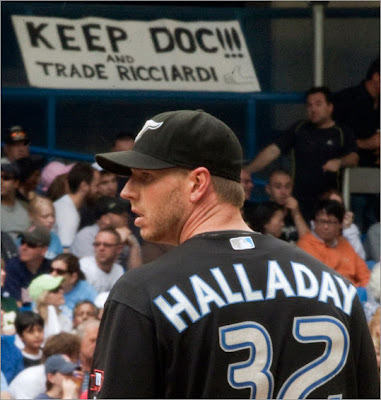 But deep down inside, how could we blame him for wanting to leave?

Doc waited most of his career for the brain trust to surround him with reinforcements, even providing them with the $ to do it.  There was always an excuse, first it was the difference in the Canadian dollar vs the US dollar.  We made our revenues in CAD and paid our expenses in USD.  When the exchange rate was at 65 cents, that excuse seemed valid.  But things slowly started to even out.  Still no help.  Then they bitched about not owning the stadium, so they tanked a few seasons and drove down attendance.  Ultimately they got the stadium for dirt cheap and did try to spend some money on players.....it just didn't work out.

Considering his on field success, it is almost easy to forget about Doc's contributions to various local charities when talking about his legacy here in Toronto.  But if you don't mention it, you are missing a big part of what made him so special.  He and his wife Brandi owned a box in the SkyDome and even had it renovated, paying for it to be done themselves.  It was appropriately called Doc's Box and every home game they treated children from nearby Sick Kids hospital to free baseball.  First class all the way. 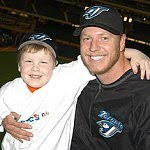 So where does that leave us?  What are we suppose to do now?

We have lost a warrior.  An true ace.  The ultimate competitor.

But we had to do this deal.  Ask any Toronto sports fan about what happened with the hockey teams former captain and you will understand why we had no choice.  There was no way we could afford to let Doc walk for draft picks.  And he had given this organization EVERYTHING he had.

The young players we got in return will always be mentioned in the same sentence as Doc.  Always.  And I for one think that may be a bit unfair.  Replacing this type of player will be impossible.  Don't even try.

A couple of positive things will happen this year for Roy Halladay.  He will get a chance to pitch in the playoffs and maybe win a World Series.  He will also (finally) be recognized as one of the best pitchers in baseball by the American sportswriters.

I have no ill will towards Doc.  I cannot and will not cheer against him.  It is not in my current DNA make up to do so.  But seeing this breaks my heart. 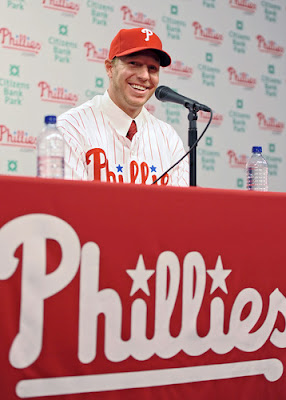 I had every intention of writing this post link free.  But I believe some of the articles that I have been saving since he left are a worthwhile use of your time.  This may take you a little while to get through but I think you need to see these:
Conclusion:

This post took a lot out of me.  I started it about two weeks ago when I thought I was able to talk about Roy being traded.....and I was wrong.  Every time I revisited it since, I would think about another story or fact that I could use to help me convey my feelings.  I could probably have kept writing about Doc for a while longer but I'm happy with this for now.  Hope you enjoyed reading it.

The healing for me has finally begun.....
Posted by The Man With The Golden Arm at 12:03 AM