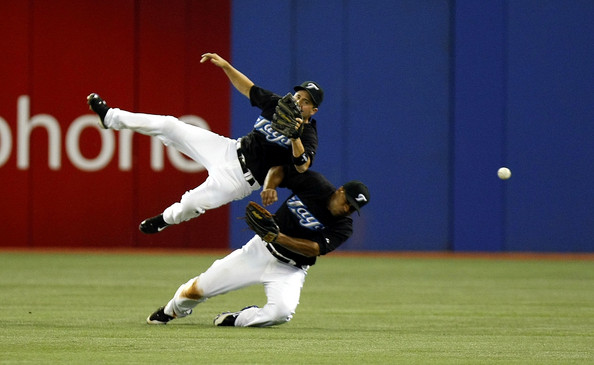 When thinking about the upcoming season, numerous things keep me up late at night.  There are quite a few issues that will undoubtedly contribute to our losing record.  I have decided to pinpoint one that seems particularly hopeless considering the circumstances.

These are the ground ball figures in percentages of the potential starting pitchers for your 2010 Toronto Blue Jays.  These stats represent the number of times a ball was hit on the ground as opposed to in the air or on a line.

From this I can conclude there will be quite a few balls going up in the air off the opposing teams bats next year, most likely toward the outfielders.  Now let's take a look at those projected outfielders Ultimate Zone Rating (UZR) for the 2009 season: 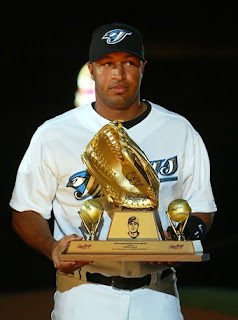 Which brings me to the 3 time gold glove outfielder.
Here is our savior's career UZR:

Anybody want to take a guess at which three years he won the award?
What worries me the most is the steady decline.


Not pretty.  Although there is one combo that doesn't look as bad as the others.  Snider in LF, Vernon in CF and Bautista in RF provides average to above average defense in two of the three outfield positions.  Look for these guys to be on the field when anybody named other than Romero or Rzepczynski is starting.

After discussing this with The Human Rain Delay, we decided that maybe we could try a rover out there.  Let the shortstop play up the middle alone. 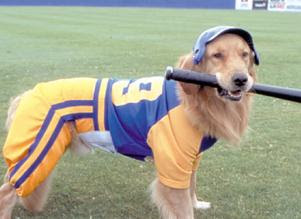 Or we could ask the commissioner's office if it would be OK if we played four across like they do in slopitch and kill the DH.  That might help with the black hole / void space that is Vernon Wells in center.

I am a big believer in matching your strengths to other strengths as a team.  Over the 162 game season, your weakness will be magnified for all to see and exploited by other teams.  You can help minimize them by acquiring players that fit into your team vision.  Check into what the Mariners are doing.....can you say pitching and defense?

For example, if you have a couple of guys on your roster that can run, group them together in the line up and turn em loose on the base paths.  That way they are not caught behind a slow runner thus neutralizing their speed.  If your team has a few guys that can slug, group them together and put a couple of on base guys, lead off type guys, in front of the them so that there will be runners on when it is their turn to hit.  If your pitching staff throws a lot of ground balls, go get some vacuums / human walls to play the infield positions.  And if your pitchers can't keep the ball on the ground, find some rabbits to play the outfield that can go deep into the alleys and make plays for them.  This type of stuff only makes sense. 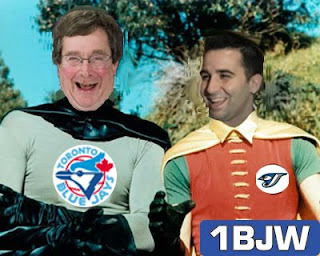 The brain trust has done none of this this off season.

What good does it do to sign players that bolster your already average infield defense, if you know that most of the balls that are going to be put in play are going to go to your well below average outfield defense?
Posted by The Man With The Golden Arm at 12:06 AM