But you're a strange animal, I got to follow

So what the fuck are we going to do with Dustin Michael McGowan? 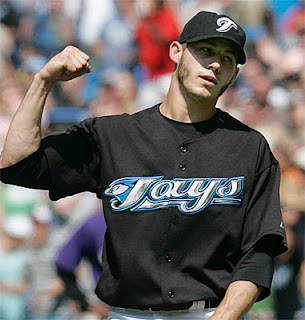 He was unable to throw a pitch for us in 2009 and has battled various injuries over the course of his career.

He also has Type 1 diabetes.  Type 1 diabetes is the worst form of the illness, which has no known cure. McGowan receives a daily shot of insulin to regulate his blood sugar levels, and he will do so for the rest of his life unless it happens to get worse. If the disease progressed, McGowan could be forced to wear an insulin pump 24 hours per day.

Earlier this month some positive news came out.  It was reported that he was feeling good and was ready to resume pitching off a mound.  He indicated that he was looking forward to spring training and has hopes of being in the starting rotation.

“I feel good. My shoulder feels great. I’m throwing again and looking forward to getting back on the mound,” McGowan said.  On a scale of one to 100 percent, McGowan rated his fitness high. “Oh, I would say I’m somewhere around 85 percent.”

There is only one major problem that I can see, he is out of options.  So he had better be ready to go this spring.  He will be throwing off a mound tomorrow and needs to pass this major test if there is any chance of him making the opening day roster.  I doubt the brain trust would risk exposing him on waivers because someone would surely claim him.  He has to much potential not to take a chance on him.  So what do we do with him?  Does this mean he breaks camp with the team?  If so, where does he fit in?

His arm stamina must be at an all time low.  He will need some time to build it up, especially if he is a starter.  I'm not sure if he will have time this spring to get it where it needs to be.  Perhaps he will is better suited for the bullpen to begin the 2010 season, which would only further complicate things there.

Now try to avoid the knee jerk reaction that I guarantee you are about to have.....at some point this season, Dustin McGowan should be our next closer.  I know, it sounds crazy.  But hear me out on this.  The more I think about it the more it works.  He would be able to reduce his inning totals significantly out of the pen.  He could drop one maybe even two of his pitches out of the arsenal, preferably his least effective and/or the one that causes him the most pain in his wing, and still have the stuff to do it.  We are going to need a long term solution in the back end of the pen and I don't see either Frasor or Downs as it.  I wonder if either of them are even going to be on the roster after the July 31st trade deadline due to their looming free agent eligibility.  Why not ease him back in by putting him on mop up duty for a couple of months and then give him a shot?

That being said I would love to see his power arm in the starting rotation along with Brandon Morrow.  You could split them up with a little Shawn Marcum action and follow with a funky lefty like Romero.  That type of mix from power to finesse back to power at the top of your rotation would certainly throw off the opposing hitters timing for a three game series.  Mix in a few southpaws and you might have a little something right there.

I guess it really boils down to how many innings can he pitch without hurting himself and if he has the balls needed to close.  We won't know the answer to those questions for a while.

In the mean time with respect to the waivers situation, fear not, there is a way around having to risk losing him that way.  Many teams attempt to do it with their players that are out of options.  I think it is very interesting to see all the guys who are in that situation suddenly get injured the week before the 25 man roster needs to be set.  The players don't really mind because they still collect their service time as if they were playing.

So, McGowan starts 2010 on the 15 day disabled list similar to last season.  Then he would stay behind in Dunedin for an extended spring training followed by a trip to the minors on a "rehab assignment".  This might buy the brain trust the few weeks they need before having to make a decision.  In that time, hopefully, all the other major league teams finalize their rosters and our chances of sneaking him through waivers improve if we go that route.  As a nice side bonus, this may be the extra time he needs to build up his arm strength if we intend on keeping him on the major league roster.

Damn this spring is going to be interesting on the mound!  Pitchers and catchers report on February 18th.
Posted by The Man With The Golden Arm at 3:38 AM