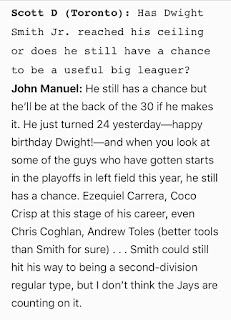 
In 2016, he patrolled all three outfield positions but the overwhelming majority - 91 of his 126 total games – were spent in LF. The left-handed hitter was taken 53rd overall out of high school in the 2011 draft.
Not sure if he was eligible for the Rule 5 draft this offseason or not but, in any event, he wasn’t selected. He is currently not listed as being on the 40 man roster. A move up to AAA for 2017 is most likely in his future and Bisons fans should see plenty of Smith Jr. in a corner OF spot at Coca Cola Field.

Our man on the field, the one and only Jay Ballz, caught up with Dwight for a brief chat in which they discuss:

This interview was done in May shortly after Bautista got decked in the jaw by Odor. We apologize for the delay in posting it. (Not really. It's a stupid blog post and it’s free, so deal with it.)