The 25 Man Roster Challenge Is Back! 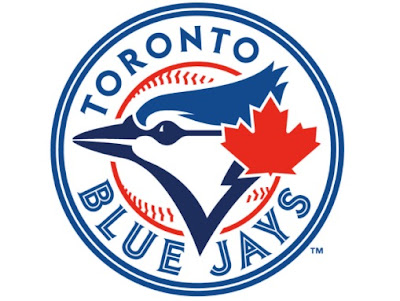 After what can only be described as an underwhelming off-season for a team coming off back-to-back ALCS appearances, we ask you once again to join us for the 8th annual 25 Man Roster Challenge.

The braintrust continually tries to assure us that there is still time to strengthen the roster, which does make this edition of the roster challenge potentially very intriguing. Considering the obvious needs of the team and the solid big league talent still currently available on the market, the possibility of trades or signings during spring training--after the deadline to have your ballot in--isn't as remote as it has been in the past. Throw in a WBC, and the very real possibility of injury that comes with playing high-intensity games relatively early on in the spring, and this thing could get messy in a hurry.

If you do decide to play, you have 3 options to submit your ballot in:

1: Send us an email: 1bluejaysway(at)gmail.com
2: Make a post on your blog, if you have one, and send us a link.
3: Add your ballot to the comments section of this post or the reminder post(s) we will do.

All ballots should have a team name and a tiebreaker.

In the event of a tie (and it's pretty much a given at this point that there will be a tie) we ask that you also give us a prediction on what you think the spring training record will be. From what we can see, it appears as though the boys of summer will attempt to play 33 spring training games this year. That total includes the 2 exhibition games against the Pirates at the Big O, but not the split-squad game against the Canadian Junior National Team on March 25 or the WBC tune-up game against Canada on March 7.

Try not to forget that sometimes it rains in Florida and the games don't generally get made up if they are cancelled. There is also a chance that if one of those games goes to extra innings and one team runs out of pitchers, both teams agree the game ends in tie.It is not a requirement that you select a tie breaker, and all ballots containing 25 names will be considered valid, but it is a really good idea that you do. Four years ago we had a stupid close finish and we actually had to break it right down to winning percentage.

It should be noted that no one has ever gone 25-for-25 in all the years we have been running this challenge; it would be really swell if that streak was broken.

Your Toronto Blue Jays currently have a number of players who are out of options on the 40-man roster and would therefore have to make the team or be sent through waivers before they could be demoted to the Minor Leagues. A few of these players are not in jeopardy at all, but there will be some spring training battles to keep your eyes on here for sure. We have not yet been able to confirm a complete list and will update this post when possible. As usual, the last few bullpen jobs and the last roster spot could be decided by who is able to open the year in Buffalo and who isn't.
At the end of the day, all you have to do to be the champion is put forth a ballot with 25 names on it. Who wins what job is irrelevant in this game, but it can't be played without taking it into consideration.

This year we have a great selection of coveted prizes for the winner to keep. Due to the fact that I won my own challenge last year, most of these prizes have been rolled over. An old school bobblehead has been added just because. Behold! 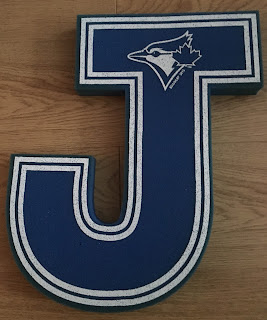 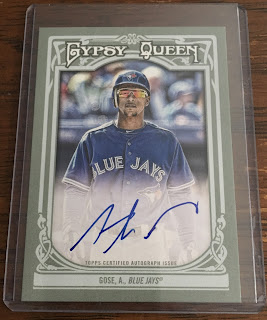 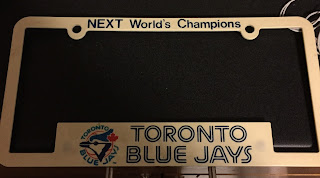 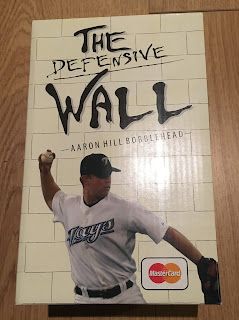 Quite a haul and more reflective of the fact that we process way too much Jays crap from the past. The foam J is the one you saw during the playoffs in 2015.

The deadline to enter your ballots will be Monday, February 13 at midnight.
Posted by The Man With The Golden Arm at 1:58 PM