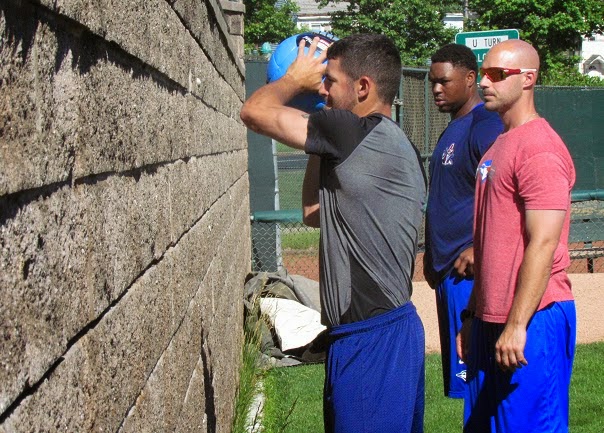 Tyler Ybarra was a late-round pick (43rd round, 1299 overall, to be precise) in the 2008 draft. He has made steady progress up the minor league ladder, being challenged with a new level at the start of each year, and he was given the chance to pitch in the star-studded Arizona Fall League after a dominant 2013 season in the FSL.

This year, he has appeared in 29 games for the Fishercats, and only 12 of those appearances have not been of the multiple-inning type—so he’s not just a LOOGY. In fact, he has some reverse splits going on, meaning he has been tougher on right-handed hitters than lefties—this year, anyways.

If you’re as tired as I am of watching guys like Rob Rasmussen get their head kicked in at the big league level, then keep an eye out for this guy as he might be in line for a shot sooner rather than later—we all know Gibby loves having three LHP in the pen whenever possible.

Our man on the ground, Jay Floyd, caught up with Tyler Ybarra and was able to impressively dodge both a possessed vacuum cleaner AND a pesky air conditioner to get some insight into the following topics: