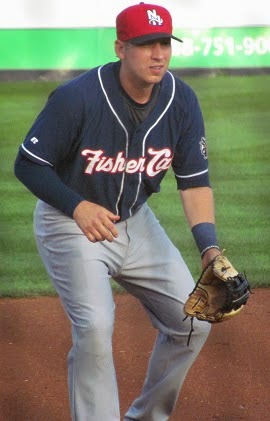 If you listen closely to the really smart baseball people out there, they will all say the same thing: the biggest jump in minor league ball is from High A to AA.

We respectfully submit exhibit A for your reference: Infielder Andy Burns. In the 2013 season he played the exact same number of games in the Florida State League and the Eastern League: 64. That allows for a rather straight forward comparison.


A few notes:
Batting average and OBP dropped almost 75 points
Slugging percentage was down over 100 points
The only increases were doubles and strikeouts

Stats taken from here. If they aren't fucking nerdy enough for you, go ahead and click here.

He does have roughly the equivalent of a full season of experience in AA now so let’s take a look at those numbers, which are current as of July 10.

That’s not too shabby, all things considered. With his position flexibility – 83 games at SS, 212 at 3B, 13 at 2B and 3 at 1B – he has an intriguing skill set that could potentially help a major league team, perhaps right away.

If you read that sentence again you’ll see that we didn’t say anything definitive, which is kinda neat!

Our amazing interviewer, Jay Floyd, caught up with Andy Burns last month and had a nice chat about the following topics and more:

Playing in the northeastern U.S. to start a season
The minor league life in general
Hobbies, and who the video game champion on the team is
The college baseball experience
His thoughts on a possible tobacco ban in baseball
What it’s like to hang out with some Blue Jays legends