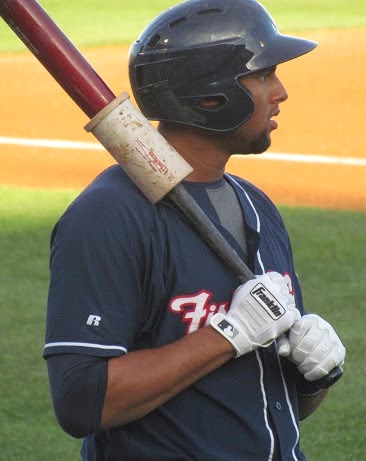 Outfielder Mike Crouse was drafted at 17 years old in the 16th round of the 2008 draft. He hails from British Columbia, stands 6’4 and weighs in at a svelte 215 lbs. We have heard him described as "looking quite good in the uniform," so to speak.

Mike had a breakout season in 2011 for the Lansing Lugnuts, where he slugged 14 bombs, grabbed 38 bags and slashed .261/.352/.475 in 101 games playing RF beside uber prospect Jake Marisnick. Mike’s production at the dish was comparable to Jake’s and had many prospect hounds drooling.

Fast forward a couple of injury plagued seasons and the chatter has pretty much died down. For the 2014 season, he has been plugging away in AA with the New Hampshire Fishercats as a 23 year-old player--which is still 1.7 years younger than the median age in the Eastern League, according to Baseball Reference.

In his complete minor league career to date he has played 199 games in RF, 163 in CF and 70 in LF, which seems a little light in terms of reps considering he is entering his 7th year of professional baseball. Hopefully he can stay on the field for 400+ at bats and the chatter will start up again. If our math is correct, he must be added to the 40-man roster before next season or he could be lost via the Rule 5 draft.

If there is any extra pride/drive/desire to play in the Blue Jays system
When baseball became the game of choice for him in this hockey crazed nation
A brief scouting report on himself
Favourite player growing up (spoiler alert: YUCK)
The experience of playing winter ball in the ABL

Posted by The Man With The Golden Arm at 4:59 PM