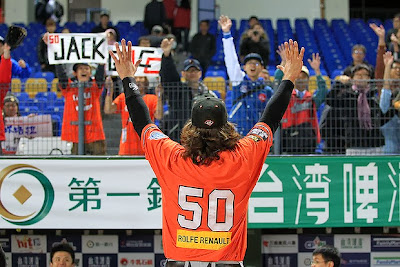 We've been sitting on this interview since May 1st of last year and it's classic Jay Floyd awesome. In the interview below we are quite sure you'll notice that Jack Murphy isn't your prototypical jock. He more than likely has a career as a coach or manager when he's done playing.

If you need some basic stats, click here. Be warned, it's not exactly pretty. He did have a big game in the finals of the Asia Series:

After you listen to the interview, you'll get the sense that Jack Murphy knows exactly what kind of player Jack Murphy is and he's totally cool with it. Classic org guy. The Blue Jays rewarded him for his loyalty with a taste of AAA at the end of the 2013 season. He then went back over to Australia again to play more winter ball. The picture from above is a shot from this off season courtesy of a local newspaper in the land down under.

He even found some free time while becoming a cult hero to enjoy himself!

Posted by The Man With The Golden Arm at 4:10 PM