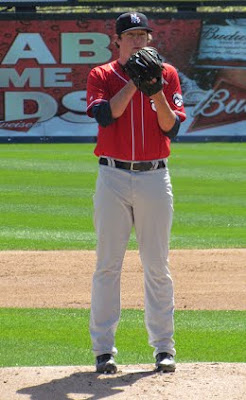 5 innings, 11 hits allowed, 8 earned runs, 2 walks, 6 strike outs, 5 HR....that's the line for Blue Jays' 2010 1st round draft pick Deck McGuire for the defending Eastern League champions, the New Hampshire Fisher Cats in Saturday's contest. The righty hurler struggling mightily in his 2012 regular season debut against division rival Trenton (NYY affiliate). In the first four innings, lead-off batters were 4-for-4 against McGuire with 4 runs scored. Most alarming of all the difficulties throughout the afternoon affair was the 3rd inning, when Zoilo Almonte, Rob Lyerly and Melky Mesa each went deep for a trio of convincing homeruns to start the frame.

Overall, McGuire, who posted a 2-1 record with a 4.35 ERA in four Double-A outings and a 7-4 record with a 2.75 ERA in 19 games for Class A Advanced Dunedin last season, seemed in good spirits and was fully ready for his next turn on the hill, following the loss.

To hear Deck's exclusive post-game comments about his poor outing click here or check out the media player below.