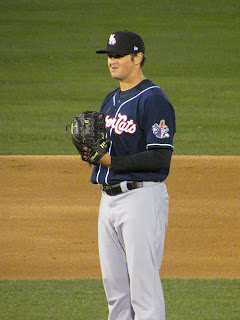 The winning ways have continued into the new season for the New Hampshire Fisher Cats. Last fall the Double-A affiliate of the Toronto Blue Jays won the Eastern League championship. In the first two contests of their 2012 campaign, the team looks just as dominant.

Following a win in the season opener at Trenton on Thursday night, the Fisher Cats rode an extremely solid outing from starting pitcher Chad Jenkins to a 2-0 record to start this year in front of 3,792 fans.

The righty Jenkins did not start off very hot, digging his team in a hole, as he ran the count full on the Yankees affiliate Thunder lead-off batter Abraham Almonte and served up a solo homerun.

According to Jenkins, he didn't feel as though he had his best stuff while on the mound Friday night. Jenkins was able to battle through the chilly weather and lacking full confidence in his offerings to down the Thunder by a score of 3-1.

Describing the mishaps in the opening frame, Jenkins said, "The first hitter, I got to a full count and (catcher A.J. Jimenez) wanted a fastball in, so I thought, 'Alright. He has seen away the whole at bat. We'll go in.' I was telling myself- 'cause I know one of them got me in spring training, in my last outing, and I threw that one down, so I was like, 'I'm not throwing this one down.' I let go of it and realized that middle of the plate isn't the best place to throw it either. (Almonte) unleashed on it."

After the homer to Almonte, third baseman Ronnier Mustelier followed that with a single, but ended up stranded on third as Jenkins settled in. Spreading just three more hits allowed over the next 5 innings without a walk, Jenkins earned his first win of the new season.

The Fisher Cats offense was led by first baseman Mike McDade, who went 3-for-4 including a double and a 2-run single that plated the defending champs' first scores of the night in the 5th inning.

New Hampshire added a run in the 6th inning on a sacrifice fly that brought home Justin Jackson.

The 'Cats bullpen was tough also, holding opposing batters without a hit over 3 innings. Matt Daly, Danny Farquhar and Aaron Loup each tossed a scoreless frame. The Louisiana native, Loup, earned the save.

According to NH manager Sal Fasano, this early success should allow the team, which was happily engaging in some debate over the varying musical tastes in the clubhouse after the game, to connect a considerable amount.

"It's nice to start out on the road with a couple of victories because it's a good bonding experience for (the players)," Fasano stated. "So, when they start playing for one another and they start caring about one another- that's one of the things we don't talk about in development, is actually caring about one another and playing your best for one another. To start out like that, it's a good way to start the season and hopefully, we can continue with the momentum and have a start like we did last year."