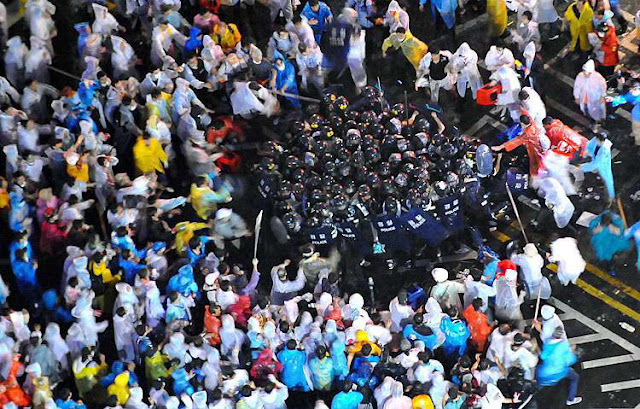 I have been meaning to write - if you are nice enough to consider this crap writing - about the the 2012 Toronto Blue Jays off-season for quite some time now. Every person I seem to talk baseball about this winter has had a strong opinion. Even the self described casual fan who only reads what they see in the newspapers. Some of the conversations have been downright unbearable. Some of them could only be described as angry. The same points have been perpetually brought up. And whether they are fair points or not, they have been embraced by most of the fan base as reality.

I don't feel it's my place to tell you what you should think about any topic. But I do feel like there are a few things that should probably be considered prior to flying off the handle and deciding your Toronto Blue Jays are a waste of your time, money and interest.

First and foremost a blanket statement:

Management personnel who work for any sports team are professional liars.

This is true across the entire spectrum of sport, which obviously includes your Toronto Blue Jays. President Paul Beeston's job entails telling you whatever he thinks you want to hear in order to get your ass in a seat at the SkyDome. I remember the infamous statement he made regarding the payroll at the State of the Franchise event circa 2011 well.

Hat tip to Ian from the Blue Jay Hunter for still having the audio and being kind enough to share it free of charge.


The only emphasis he made in that entire statement was on the first should. It was convenient that he neglected to give us a timeline on this grand vision.

I can understand why the win now crowd would expect this to happen now since it clearly did not last year. That's kinda their thing.

More proof of this is a topic that's near and dear to my heart:

You see, I had the balls to disclose some info that I heard about King Albert and his crew being in town. Now I already said pretty much all I have to say about it right here but the quote below only furthers my blanket statement about management personnel being professional liars.

One question to draw a reaction from Anthopoulos was a sarcastic query about where he and Dan Lozano, the agent for free agent slugger Albert Pujols, had lunch this week. Some blogosphere fiction suggested Lozano was in town to visit the Jays, which drew a smirk from Anthopoulos, who struggled to maintain his policy of not replying to rumours and speculation.
"I've read all kinds of reports and again, I'm not ceased to be amazed about some of the false things that come out," he said.

Hat tip to Shi Davidi for the original article.

Based on the conversations I had at the State of the Franchise circa 2012 most people chose to believe me. For those that still don't, naturally I saved the smoking gun till now. 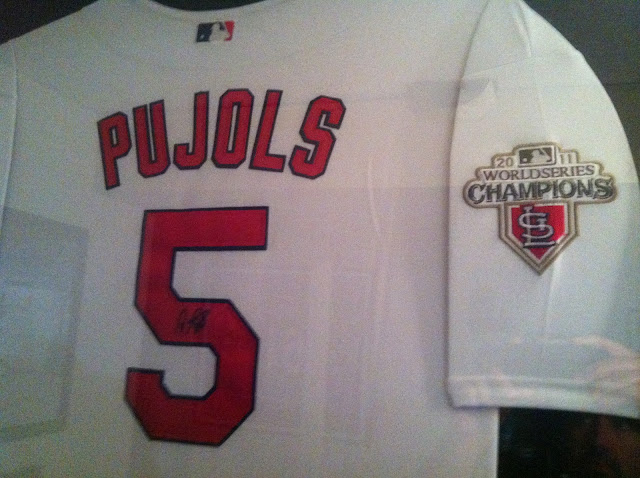 Notice the 2011 World Series Champion crest. Logic would dictate that this jersey was signed after the 2011 postseason and prior to my passing along the news that he was in town.

Point being, AA is full of shit as well and he's learning the game from a master. In fairness the general manager's job also entails being able to answer a direct question without actually saying anything. But in the quote from Davidi above, AA lets his guard down and flatly denies it. Gotcha.

I guess what I'm ultimately trying to say here is that one should not take what the brain trust of this ballclub has to say at face value, at anytime. Trying to make someone in the win now crowd understand this is a crucial first step in the process.

So when Beeston says he expects to make the playoffs 2-3 times in the next 5 years, you have to literally laugh it off. Does he actually believe this to be true? Maybe he does. But he immediately gives himself an opt out clause when he follows up with:

The only thing he forgot to include was now go buy some fucking tickets.

Where am I going with all this? I'm not what you would call a half glass full type fellow. In life in general but specifically when it comes to baseball. It's a ridiculously long season and there are many ups and downs. After 162 baseball games are completed the best teams will rise to the top. Your Toronto Blue Jays are not one of these teams right now. A whole bunch of shit would have to break our way for this to happen. Does that mean they suck? No it certainly does not. Does that mean we are a couple of big players away from closing the gap? Not in my opinion. I believe this team hasn't even learned what it's going to take to win. They want it very badly but they haven't developed the attitude or swagger if you will just yet. Currently the way we are set up, we don't even have the horses - in their current state of development - to play in October.  Name me one pitcher that will have anything left in the tank when playoff time rolls around. Can't do it.

But they are on the right side of the curve and that my friends is very, very good news. The alternative looks a little something like this.

As I like to put it, this version of the Blue Jays closely resembles the 1983 squad. A team that was young and had talent coming out the ears. A team that was ignorant to the harsh realities that faced them. A team that went out and played hard no matter what. A team that won 89 ball games and finished in fourth place. A team that would look very different than the one that would eventually - almost a full decade later - win the big prize and fill the city with joy.

Listen, I love the win now crowd. I really do. I think it's imperative that a certain segment of the fan base will not accept losing at any cost. I'm just not sure that now is the time to release the hounds because you will only end up disappointed and have no one to blame but yourself.

If you need something to focus your rage at I do have a suggestion. Balance the schedule so that every team plays every other team the same amount of the time. If that were to happen, then I think we got a shot at the promise land right now.
Posted by The Man With The Golden Arm at 5:52 PM

Labels: one step at a time