The Week That Was 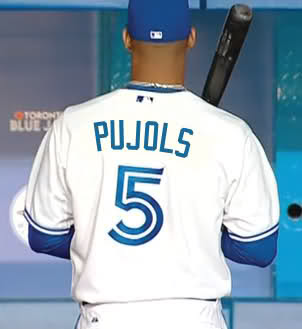 Exactly one week ago today we stated that agent Dan Lozano and his associates were headed to Toronto. The name Albert Pujols was liberally thrown around as being in attendance but never once confirmed by us.

Didn't really get the chance.

The biggest dog on the porch, the mighty Drunk Jays Fans and their crazed monkey army jumped all over it and away it went into retard land. In fairness, the post itself was written in a somewhat complementary tone while the comments section was predictably a gong show.

The overall reaction was naturally mixed and since we weren't prepared to disclose the source of this information - still aren't/never will/stop asking - it was quickly scrutinized and for the most part discarded. The main stream media did their best to disproved it while team officials totally denied it.

No truth to talk that Pujols and Lozano are or were in Toronto. Lozano in LA office Tuesday

Courtesy of You Don't Know Dick

In an interview with the Star just last month, Jays president Paul Beeston expressed lingering bitterness over the way similarly high-priced free agents used his Jays as a negotiating tool back in the ’80s — before they had won anything. Beeston singled out free-agent reliever Rich Gossage and his agent Jerry Kapstein allowing the Jays to think they were in the running, then using that offer to bump up the price elsewhere. The long-memoried prez insists the Jays won’t get fooled again.
He proved it last year when the anticipated Blue Jays bid for the much-coveted and seemingly undecided Cliff Lee, the cream of that free-agent crop, failed to materialize. The same professional disinterest espoused by Beeston, on behalf of the Jays in dealing with top free agents in non-contending winters, is expected with Pujols and Prince Fielder. It’s a philosophy he passed on to GM Alex Anthopoulos.

“We’re not doing anything for a short-term fix … We’re not going to buy a team,” Beeston said.

One question to draw a reaction from Anthopoulos was a sarcastic query about where he and Dan Lozano, the agent for free agent slugger Albert Pujols, had lunch this week. Some blogosphere fiction suggested Lozano was in town to visit the Jays, which drew a smirk from Anthopoulos, who struggled to maintain his policy of not replying to rumours and speculation.
"I've read all kinds of reports and again, I'm not ceased to be amazed about some of the false things that come out," he said.

Every single one of them refuted our claim and there are some heavy hitters on that list. All except Jeff Blair. We love Jeff Blair. He hasn't yet lost his ability to think outside the box.

The GM managed to get Beeston to overcome a significant aversion in getting him to sign off on a five-year contract extension for pitcher Ricky Romero in 2010, but it would be an even neater trick getting Beeston to think big, bigger, biggest in the free-agent market. That leaves the Blue Jays not even on the periphery for the likes of sluggers Prince Fielder and Albert Pujols – unless Beeston and Anthopoulos are working some kind of ruse.
All’s fair at this time of the season, folks. They might have us all exactly where they want us.

Here's what the message boards and comment threads had to say about it. Spoiler alert: not very positive

Courtesy of BlueJays.com (skip to page 6)

Hopping on Fan 590 with @JeffSammut590 after 9 to talk #jays, #mlb & ridiculous Pujols rumours.

The Pujols bit was the lead story and was quickly whisked under the rug. To paraphrase the conversation - as it happened on the fucking radio - it went down a little something like this:

Sammut: What's the deal with this Pujols rumour?

Cormack: It's just some silly blogger. They like to throw a bunch of stuff against a wall and see what sticks. Next question please.

It was at this point in the game we decided it was best to fold our hand. A memo went out to all staff: maintain full radio silence until further notice. The hate mail piled up while we just sat back and took names. Nobody believed us. And frankly, why would they? With this much evidence pointing to the contrary it was fairly easy to move right along to the next rumour.

What we took away from this entire exercise can be summed up like this: unless your name is known and respected in the baseball community there is absolutely zero point in trying to share a little snippet of juicy news you heard about your favorite team.

Even if we revealed our sources and told the other 90% of the story that we are privy to, it would have remained an extreme uphill battle for the good guys (us) to reclaim our honour that in the end just isn't worth the headache. We consider this an extremely valuable lesson learned. From this day forward there will be no more of this type of goodness from us.

Most of you reading this still probably think to this day we are a total joke and that's honestly completely cool with us. For those people we counter with just one simple question:

How did we possibly get our hands on this bad boy? 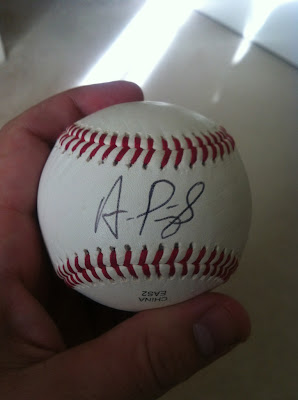 There's that and a FULL WEEK LATER there's this.

Posted by The Man With The Golden Arm at 3:28 PM

Labels: extra helping of hate, Gong Show, silencing the haters, Weekly Round Up