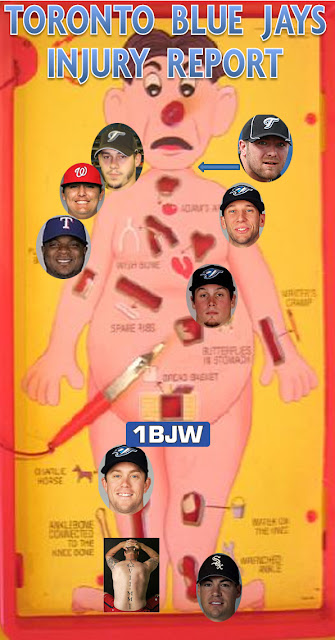 Quotes: "I tweaked something. We've just been taking a very cautious approach with the idea in mind of being ready for opening day. Hopefully, this thing is short-term. It happened about a week ago while playing golf before we even reported. It was a freak thing. It wasn't something that exploded on me, but just progressively got worse. It was a par-3. I hit it in the water. The best way to treat it is with rest and ice and not push it. I'll start playing as soon as possible. There's no timeframe at this point. It's already gotten a bit better. I'm glad it happened in February so that I don't have to be away from the team and trying to rush things back. The timing is unfortunate for spring training. There's a lot of work I wish I was able to be out there doing, but the most important thing is to get healthy." Travis Snider

Where he's at right now: He has taken batting practice for three consecutive days.

Bullshit Meter: Off the charts. Bob Elliott thinks something is up. He's not the only one.

25 Man Roster Challenge Implications: Everybody took Snider on their ballot. So if he is unable to go then everyone is fucked equally.

Quotes: Manager John Farrell described the decision as “precautionary” and said the injury is unrelated to the hamstring problem that put Hill on the disabled list at the beginning of last season.

Where he's at right now: He went through full baseball-related activities on Sunday.

Bullshit Meter: Extremely high. To say that this injury - considering it`s proximity to a known previous injury - is unrelated, is a little suspect. Generally the human body over compensates when a specific area is hurt and that sometimes results in another injury. Anyone that has sprained one of their ankles will tell you that eventually the other ankle gets worn down due to over use. Perhaps that is what is going on with Hill's leg. Just saying.

Quotes: "It's not alarming, he's still throwing a baseball, we've got a progression mapped out for him. There's not an injury here per se, there's not a fatigue factor, he just likes to take things a little more slow, a little bit of a more gradual buildup to games." John Farrell

"It's the shoulder. We're just working to get it strong enough to go through the season. ... I think it's just part of the process." Frank Francisco

Where he's at right now: He never actually got shut down.

Prognosis: Expected to get into a game this weekend.

Bullshit Meter: Very low. The slower pace is consistent with Francisco's past so there is nothing to see here.

25 Man Roster Challenge Implications: Everyone took 2Frank as well. Team April and Team OKBlujays were the only ones to not select him as the closer for the tie breaker. If he is unable to go, they stand to gain the most.

Quotes: “We just want to be sure that he has passed some tests from a physical standpoint before we put him back on the mound, we’ve got time on our side right now, and there’s no reason to think he won’t be ready once we get into the [Grapefruit League] schedule.” John Farrell

Where he's at right now: He is throwing 40 pitch bullpen sessions restriction free.

Prognosis: Expected to get into his first game on Thursday.

Injury: Plantar fasciitis in his left or right foot or both

Quotes: "I did everything normally up to a few days ago then it jumped back up and bit me. I want to do all the things to prevent this from coming back during the season. It would be easy to try to hit the ground running, but I can't do that. I have to be smart with it. I have to get prepared to take on the demands of 162 games, so I've communicated well with (trainer George Poulis) to this point and they're going to have a good plan for me to do that." Scott Podsednik

Where he's at right now: He took live batting practice yesterday and is expected to begin a light running program.

Prognosis: Doctors told him the cortisone shot he had injected normally takes around a week and a half to two weeks before it starts to work. Do the math.

Bullshit Meter: Ridiculously high. A quick recap shows that this injury apparently happened during a three day window. Sure it did.
25 Man Roster Challenge Implications: Team James and Team Dave were the only contestants not to have Pods on their ballot.

Quotes: "It's starting to get a little bit better, but not to the point where we're going to think [Monday] is going to be that drastic of an improvement," John Farrell

Where he's at right now: He missed his (dream match up) scheduled start yesterday.

Prognosis: Will throw a bullpen session tomorrow and is expected to make his first start of the Spring on Saturday.

Bullshit Meter: Very high. We are being led to believe he hurt himself sleeping. Really?

25 Man Roster Challenge Implications: Team Jonathan, Team James, Team Nemesis Enforcer and Team Man With The Golden Arm are the only managers not to have Drabek on their ballot.

Quotes: "This is basically my last chance to get it right, and I want to do it the right way and make sure everything goes smoothly," Dustin McGowan

Where he's at right now: He is still throwing his scheduled bullpen sessions and continuing to building up his pitch count, intensity and repertoire.

Prognosis: Not expected to break camp with the team. Looks like another DL trip and "rehab assignment" to start the year in his future.

Bullshit Meter: Non existent. Not much to say here. It is what it is.

25 Man Roster Challenge Implications: No one selected him. Everyone is cheering for him.

Injury: Inflammation in his left shoulder

Quotes: "We're going to back him out for a couple of days," John Farrell

Where he's at right now: Recent test results revealed there is no structural damage to his left shoulder.

Prognosis: Doctors recommended that he stops throwing for the next seven days.

Bullshit Meter: Very low. Cito abused Jesse for a season and a half. Looks like it may be catching up with him.

Injury: Inflammation in his right shoulder

Quotes: "What's best for him is to back off a little bit," John Farrell

Where he's at right now: He has thrown a bullpen session and is scheduled for another one tomorrow.

Prognosis: Not expected to pitch in a game anytime soon.

Bullshit Meter: Uber low. The Chad had the same shoulder surgically repaired and lost pretty much two full seasons because of it. Yikes.

25 Man Roster Challenge Implications: Team LastRow 500`s is the only contestant that took a flyer on Cordero.

You Don't Know Dick really, really just needs to let it go. J.P. is long gone and voluntarily signed up to deal with the NY Mess. Ha!
Posted by The Man With The Golden Arm at 6:22 PM