A Villanueva With Hair! 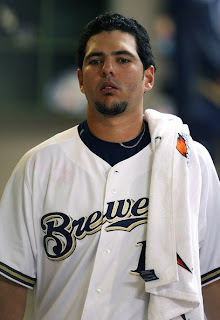 AA traded yet another player to be named later in exchange for RHP Carlos Villanueva. I'm poised to believe that he definitely is someone who could benefit from a change in leagues and scenery. Yes, his career average fastball velocity is 100 MPH minus 12 MPH but he has a chance to win a bullpen job in Toronto and maybe re-gain his '06-'08 success.


In '10, Carlos and LaTroy Hawkins pretty much teamed up to see which of the adversarial pitchers could spend more time on the DL. He also lost a job to Zach Braddock, and now the Brewers seem more inclined to give the younger fellows on their roster a chance, such as the aforementioned Braddock. The Jays on the other hand, currently have several bullpen spots to fill. Villanueva is sure worthy of a spot, but that comes with a very, and I mean VERY good Spring Training on his part.

He's a 4 pitch pitcher that uses his change up to get guys out. I'm guessing it won't take very long to figure out if he can hack it in the AL East.

Posted by SPANdemonium at 3:07 AM