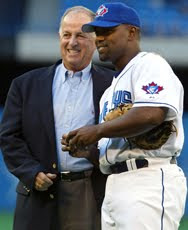 (Damn I miss both those guys)

In the late 80's and early 90's GM Pat Gillick was running the show in Toronto.  Only two teams made the playoffs back then which meant there were only really a couple buyers.  Your Toronto Blue Jays were in the mix consistently and rarely made any upgrades at the deadline.  Which is not where the term/name/phrase/saying/whatever Stand Pat came from originally but more, what it will always mean to me when I hear it used.  I think of Stand Pat Gillick not getting any help for us via trade and then losing against the Bash Brothers of Oakland.  Kinda negative I know but.....

We are treading around .500 and 11.5 games out of the wildcard race.  We would have to leap frog past 3 very good clubs - 2 of them within our own God damn division - to gain a birth in the promise land.  Not outside the realm of possibility but certainly not "contending" either.

We had a few deals that were not doubt discussed but we chose to Stand Pat.  I must admit that I was hoping for some more prospects to drool over but I trust, in the end, Boy Wonder did what he thought was best. 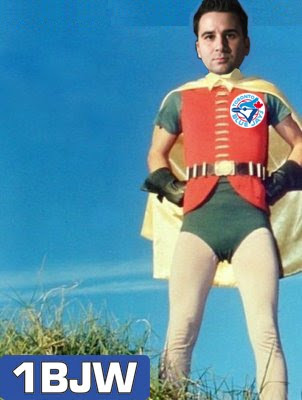 Which is more than good enough for me

Your mission for the next 2 months, if you choose to accept it, is to stay ontop of the Elias Rankings.  Click on that link so the rest of this post hopefully makes some sense.

The dynamic crew over at MLBTR periodically put out the current rankings on their site.  You need to take note of this starting right now.  Here's why:
If everything goes our way in the winter - which would be the equivalent of the stars aligning - than we could possibly net an additional 2 first round and 4 supplementary first round picks in the 2011 Amateur Draft.  Considering the size and talent of our scouting staff, that's really good news.  That is the absolute best case scenario so don't get all worked up just yet.  Worst case scenario is all 4 players return on 1 year deals and we do it all again next July 31st!

As much as we all wanted to see some trades get done, I figure those were the 6 reasons why in fact they did not.
My Mom has bestowed to me many great pieces of advice in my life but none that I use more in any one day than the following:

Sometimes the best thing you can do, is nothing at all.

My Dad countered with:

Late is OK but pregnant is no good.

Try to keep in mind AA did very well bringing in Esco in the Braves fleecing and made a move for Anthony Gose.  He also got some depth at 1B with the Mike Jacobs acquisition.  All this happened before the trade deadline bonanza so I think it is fair to say he was somewhat active.

Also worth noting is the fact that there is still an opportunity to make deals up until August 31st.  It's just more complicated.  Check out this link for an explanation on how it works now.  Players currently on the DL can not be put on waivers.  That may explain why Buck was DL'd so quickly.  If he comes back in the minimum 15 days, there would still be time to place him on waivers.

E5 has already cleared waivers and can be traded to any team, right now.
Posted by The Man With The Golden Arm at 6:41 PM