Game 126 Recap: Live And In Effect 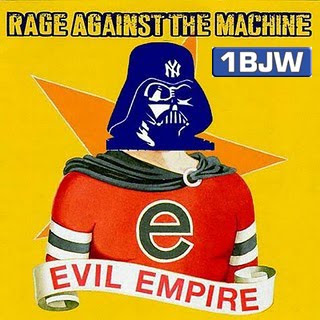 I sent out a text message around noon to see if I could find a wing man for the rubber match game against the Yankees. Only one willing and able man replied yes and that man was the infamous Jimmy Triggs.

Seeing a game with Jimmy is an experience that every Jays fan really should partake in. It's always a blast but there is one small downside, normally I can't remember much of the actual game at all. Game 126 was no different. Thank goodness for PVR.

The Good:
The Bad:

Much was made early on in the season about umpire Joe West's comments regarding the pace of play for a game that the Yanks and Red Sucks played. At the time, Joe was made out to be the villain.

For the record: I think West is a douchebag.

But after watching catcher Jorgay Posada make 6 trips to the mound in the first 4 innings, I gotta say West may be on to something. That total doesn't even include the 2 visits by the pitching coach and the 1 trip by the manager.  In total, 9 times a Yankee went to the mound to discuss something with their pitcher in the first 4 fucking innings.

In classic Yankees fashion, the game was not over till it was in fact over. Somehow their hitters managed to get down to their final strike on 5 separate occasions before finally registering 3 outs in the top of the ninth. In those at bats they ended up getting 2 walks, a single, a HBP and then mercifully, the fly out to end the game. Love em or hate em you have to respect that.