Game 87 Recap: Live And In Effect

So every year I do this thing for my birthday present with my God parents.  They order 4 smoking tickets in the second deck, the padded ones with the cup holders, early on in the winter for a Friday game of my choice.  Normally I pick a game vs either the Red Sucks or Evil Empire, just cuz I hate them most.  We meet prior to the game at Lone Star on Front Street and catch up over some fajitas and a couple of beers.  The deal is, I am suppose to bring whomever I am dating at the time for the evening.  That did not happen this year and it is definitely a story for another day.  In truth, my God mother was not able to be in attendance either so I was asked to find two willing participants to join us.  No sweat right?  Wrong.  Took some time but I was able to talk the postless wonder jaysaremy2ndfavoriteteam, who lives in Owen Sound and John Boon, who lives beside the SkyDome into coming.

This year I picked game 87.  It turned out to be billed as a great pitching match up with our ace in training Rick Roll vs All Star LHP Jon Lester.  The 14 - 3 trashing your Toronto Blue Jays took on the chin tells a different story.  I guess that is why they play the game.

I'll spare you most of the details but I will say this: I SUGGESTED we leave the game in the 8th inning and I NEVER do that.  Like ever.

It was a nice evening and the sun came out at 8pm! 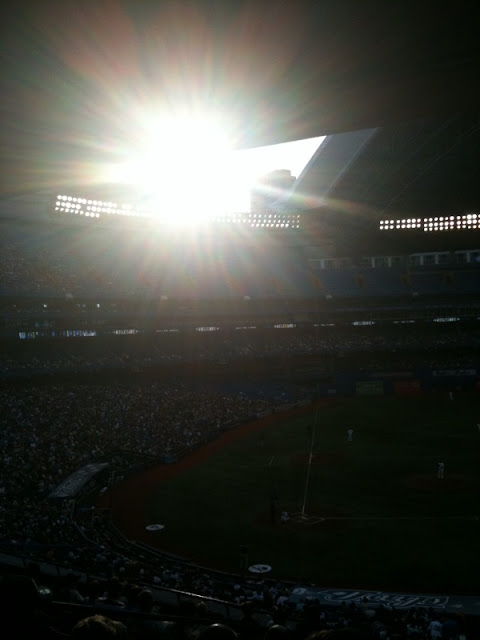 I pointed out to my party in the 1st inning that being in the second deck kinda sucks for heckling.  You are way to far away from the field and the players can't hear you.  After 6 innings and 14 runs against I muster up the balls to yell a simple "you suck" at Lester after he gives up the bomb to Johnny Mac.  An entire family of Red Sucks fans sitting in the section beside us turned and looked at me in shock.  Mama bear stands up and glares, clearly with bad intentions, directly at me.  The 6 year old little girl who is proudly sporting a Lester jersey stands up, turns around, and points at the name on the back with the double thumb over the shoulder.  But the best reaction, by far, was the 4 year old little boy.  He simply yells at the top of his lungs: "No YOU suck"

I was drunk tweeting the game.  Here is some of my work:

As we were saying our goodbyes I asked my God father if it would be ok for next year that we pick a game against the Royals or Indians.  He smiled and nodded.
Posted by The Man With The Golden Arm at 9:59 AM