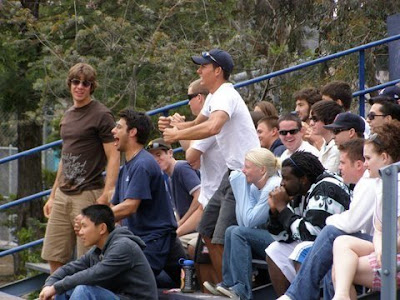 Simply put: There is nothing better than heckling at a ball game with friends.  Here is a step by step guide to assist you on your mission.

1) Do your research on the opposing team. It is very important to look up stats, pictures, and wikipedia information on the opposing team’s players.  Find out where they are from.  Find out what their hobbies are.
Example: Luke Scott made a stop in town last year.  He is a bible thumper named after the patron saint Luke.  I informed him that God's power stopped at the roof of the Dome, and He could not help him here.
2) Get drunk.  Pre game festivities is a must.  Since you will be drawing attention to yourself  I do not advise "smuggling" in a bottle.
3) Bring an army.  You will not be able to keep up the pace needed all game.  Minimum of three willing and able bodies is suggested.  After about six innings, the other hecklers at the game will find you.  We are drawn to each other.
4) Sit close to the field.  Spend the extra 25 bucks and get decent seats.  Field level is a must.  Second/Fifth deck is pointless.  The SkyDome is quiet pretty much all game but it negates the need to complete step 5.
5) Clear out the section early.  Nothing worse than trying to heckle over the head of a small kid.  Let your intentions known to the parents and suggest a section change.
6) DON'T SWEAR.  Difficult to do after completing step 2 but this and only this will get you ejected from the stadium.
7) Start with Mr. Umpire.  Everybody hates the umpires.  Get his first name.  Anything close that doesn't go our way MUST be punished.  Consider this your "go to" material for later.
Example: I was just giving it to the first base ump for a close call he made in the first inning.  I kept it up all game.  In the 8th there was a bang/bang play that he could have called either way.  It went our way.  He glanced over his shoulder at me a couple pitches later and gave me a look like: OK are we even?
8) Pick on the rookie.  These guys are not ready for it yet.  Start here as a beginner.
Example: Justin Ruggiano of TB was in left field as a late game defensive replacement a few seasons ago.  He went to Texas A&M.  "Aggies suck" was all it took.
9) Try to avoid the one guy on the field that can hurt you.
Example: I was in Dunedin for spring training.  Jays vs. Yanks.  I stood up and yelled at Jeter "Hey Mrs. Jeter get off the field and let the men play".  He jacked the NEXT pitch on a line to right center for a home run.  Not exactly the result I was looking for.
10) Don't get discouraged.  These guys are pros.  They make more money than you and I will ever see and will tune you out.  Don't give up.  Everyone has something.
Example: Manny was in town with the Red Suck a few years ago.  Late in the game after his last at bat, a quick IPhone search revealed his childrens names.  I proceeded to yell at him that "Lucas can't read".  The 20 million dollar man actually acknowledged my existence with a disgusted look on his face. 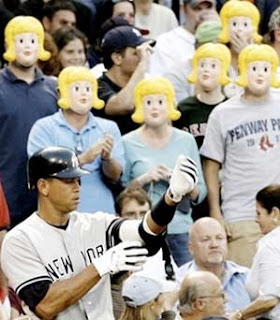 These guys didn't read step 9.
Posted by The Man With The Golden Arm at 5:32 PM