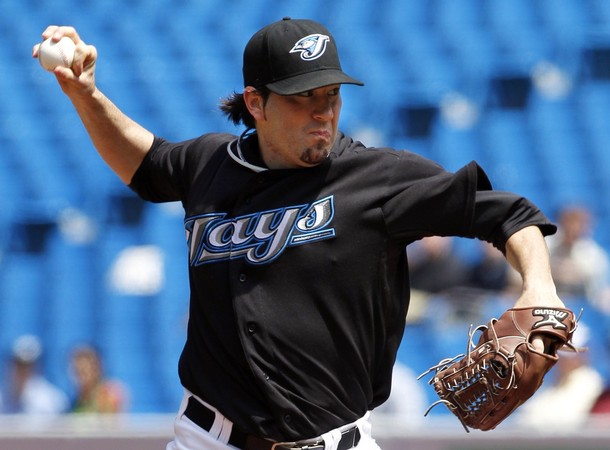 That right there is the grip used for quite possibily the best change up in the Major Leagues.

I have been watching as many games as I can. The west coast swing made it quite difficult to stay up and give you all a report. With the boys back in town for what use to be known as Flashback Fridays, I had a chance to make some notes.

Aaron Hill is running MUCH better. He didn't hesitate to advance to second base on a poor relay throw after his solid RBI single in the first inning. He even tagged up on a medium fly ball and went to third, eventually scoring on Bautista's triple. Neither of those leg plays were possible even a week ago. Important to have that speed in the two hole. He also homered on an 0 - 2 fastball / mistake that was up in the zone in the bottom of the 6th.

Buck Martinez referred to the Rogers Centre as the SkyDome during the Wieters at bat in the top of the 2nd. Wonder if there is a fine for that?

John Buck really controlled this game from behind the dish. He helped Marcum get out of trouble all day and made some huge blocks on balls in the dirt. That gives the pitcher confidence to throw the breaking ball in any count, in any situation. Buck even went to the outside indicator after veteran Miguel Tejada got to second base. As a former catcher, I was disappointed in the fact that I did not really know what the purpose of those signs were. Obviously, they are signals similar to the fingers but after a few phone calls to the crew, jaysaremy2ndfavoriteteam informed me that they are usually used to signal to the middle infielders on attempted pitch location. He used to be a shortstop, you see. Fucking little guys.

Roberto Alomar made a brief appearance in the booth with Pat and Buck. He is in town for the roll out of his new clothing line called Second 2 None.  After sucking The Cito's dick for a bit, he stated: "There have not been a lot of big, big numbers offensive wise" when discussing the Jays style of play this year. Apparently he has not been watching to close.  I wonder if he is going to stick around for a little Men's C slopitch on Monday night in Georgetown?   I'm being serious.  Click that link right now.

Starting pitcher Shaun Marcum had to work for this W. He struggled with his command a little bit but he was able to get out of a few jams and strand the base runners. In the 6th inning, his final inning, he reaches back into the tank and K'd the side. Impressive performance.

How do you not mention V Dub?  He hit a laser beam in the bottom of the 6th inning giving him 12 on the year. It also put him second on the career all time list for home runs by a Toronto Blue Jay with 204. He now trails only King Carlos and his 336.

I will end with this: my prayers have been answered.  Lyle fucking Overbay and his .197 average got moved down in the order.  Thank fuck.  He responded with an 0 for 3.  Shocking.
Posted by The Man With The Golden Arm at 1:17 PM