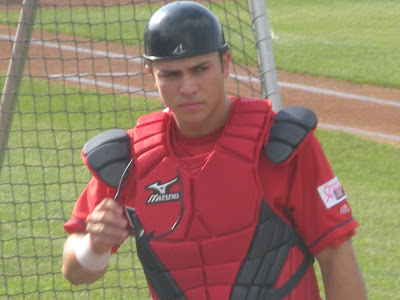 Dunedin closer Matt Daly was added to the team as a substitution after Tampa pitcher Hector Noesi was promoted to Double-A.

Both and ended up with five selections, with , and each having four. Daytona had three selections. South Division leading led all teams with seven selections overall.

The Dunedin Blue Jays were at the top of the FSL North Division after Friday night’s action at 31-18 overall, and it was due to the hard work of their all-stars.

Alvarez, 20, has gone 5-1 with a 2.42 ERA in nine starts this season, striking out 31 and only walking nine. The right-handed starter was named the #5 prospect in the Blue Jays system by Baseball at the start of the season.

D’Arnaud, 20, hit his fifth home run of the season on Friday night and is hitting .309 this season with 22 RBIs. The catcher has a team best .543 slugging percentage. He was acquired in an offseason trade that sent Roy Halladay to in exchange for d’Arnaud, Kyle Drabek and Michael Taylor.

Gomes, 22, is batting .286 on the season with 10 doubles and 14 RBIs. Also a catcher, Gomes is in his second season of professional baseball after being drafted in the 10th round of the 2009 draft out of .

Pastornicky, 20, is batting .263 and has split time between shortstop and second base this season. He has three home runs with 19 RBIs and has stolen a team-high 13 bases.

Daly, 23, has 14 saves in 15 opportunities with this season, tops in the Florida State League. He has allowed a run in only three of his FSL-best 22 appearances this season.
Posted by The Man With The Golden Arm at 10:39 PM