Game 23 Recap: Live And In Effect 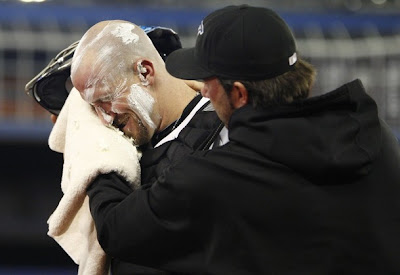 I had to wait a while to report on the game due to various reasons, mostly pre and post game festivities related.  Hot Rod, The Raezor, Jimmy Botts, Jimmy Triggs and yours truly met up for a guaranteed shitshow.  The Raezor is in town for the weekend from Calgary and he wanted to see a game.  He mentioned to me that this would probably be his only game in the SkyDome this year and he wanted to do it up right.....

There was some serious heckling going on and we got to A's clean up hitter Kevin Kouzmanoff.  At one point I turned to the people in my section and encouraged them to "yell at somebody"  To my surprise, most of them actually did.

Right at the end of the video you can see Buck's eyes look up quickly.....guarantee that was us.

During the post game interview of new hero John Buck, Hot Rod and I went down with the intent of yelling at Sam Cosentino.  At one point I was letting John know that I wanted to have his children and green coat security guy took note and made a threatening motion at me.  I laughed at him.  He called the cops.  Me and Hot Rod bounced.  Cops were waiting.  I recall the conversation well.

Officer: Sir you have been asked to leave.
Golden Arm: I will do just that.
Officer: Take a BIG sip of your beer and come with me.
Golden Arm (looking down at a half full beer): Yes sir.

As we got about half way to the door.

Golden Arm: Would be ok to take another sip?
Officer: Pound it. Hurry up we gotta make this look good.

I shook his hand as I exited the SkyDome.  Good times.

As you can probably guess, I had to watch the greatest invention in modern day history, the mighty PVR, to fill in the details.

Jays win 6 - 3.
Ricky stops the losing streak at 5.
Gregg got his 6th save striking out the side.
Justin DL Duchscherer limped off the mound in the fourth inning.  Glad I dropped him in my keeper league.
John Buck and Travis Snider hit back to back jacks in the third.  Both were no doubters.

Buck got a rare three happy cats for his efforts.
He hit two fastballs and a curve over the wall for 3 home runs.
His last of the three bombs went off Windows in center.
He became the 15th Toronto Blue Jay in team history to accomplish that feat.
He had five of the six RBI for the game.

I will send it over to King Jordan to describe the situation when he stepped up in his forth and final at bat in the 8th.

TORONTO -- As John Buck approached the plate in the eighth inning of Thursday's game against the A's, he could barely hear himself think.
The crowd on hand at Rogers Centre rose to its feat and joined together in a chant of, "Buck! Buck! Buck!" Toronto's 6-3 win was close to being in the books -- thanks to a solid effort from starter Ricky Romero and Buck's heroics -- but that was not enough.
The fans were hoping to witness history -- a fourth home run in a single game from one of Toronto's players -- and Buck tried to deliver.
After falling into an 0-2 count against A's reliever Brad Ziegler, the big catcher took one final monstrous hack, sending the ball sky-high and eventually into the glove of Oakland right fielder Ryan Sweeney for a routine out.

The history the author is referring to in another one of his rock solid pieces happened once before in the SkyDome.  I remember it fondly.  We all need to keep going to the game people.  Cool shit happens.
Posted by The Man With The Golden Arm at 7:30 PM