And The Winner Of The Cuban Lottery Is: US! 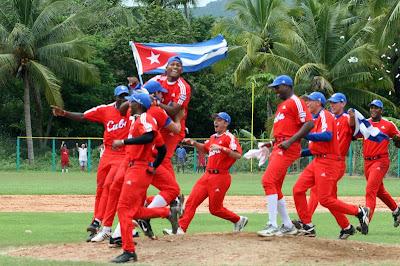 Apparently he resembles a young Alfonso Soriano.  Long and lean.

According to Cuban Ball Players:

On defense: Hechevarria covers a lot of ground, has amazing quickness, great hands and his footwork is excellent.

On offense: Hechevarria likes to hit behind the runners. During last season, he hit 50 times toward right field. He also hit 38 times to left field and 32 to center field.

There are a couple of additional videos of him available if you click the link above.

Start at the 4:58 mark, Hechevarria makes a crazy play to his left.  He uses a big glove for a shortstop.

The deal has been reported to be 10 million for four years.

How long does he stay in the minors?  Does he get a look this season?  Does he speak any English?  What is his nickname?  Is it half as cool as The Cuban Missile?

Looks like he is a wizard with the glove.  Based on his hitting tendencies, he probably has the right skill set to hit second in the order.

To me the biggest story here is that this guy turned down the Evil Empires offer for ours.  Boy Wonder outmaneuvered Cashman.  Fucking A!  And fuck you Skankees fans.

I'm wondering when this becomes official if he will be placed on the 40 man roster?  And if he does, who gets dropped?
Posted by The Man With The Golden Arm at 1:57 AM