G20 Summit In Toronto Can Go Fuck Itself! 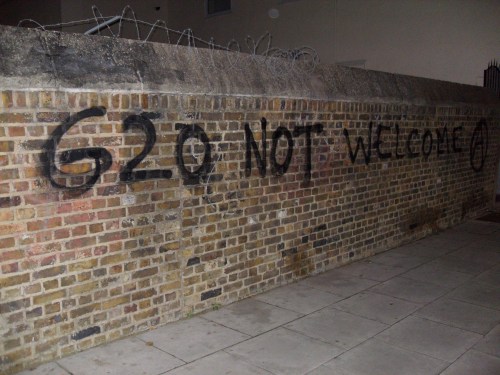 Well shit.  Isn't this just perfect.  We have a slight scheduling conflict already for the summer and it's only February.  According to The Canadian Press the much anticipated weekend series June 25 - 27 against the Phillies will be disrupted by the G20 Summit scheduled for June 26 - 27.  Toronto has some experience hosting this type of grand affair in the past and seems destined to hold the meetings at the Metro Toronto Convention Centre.  Circa 1988 we held the G7 Summit there and the streets of downtown Toronto looked a little something like this: 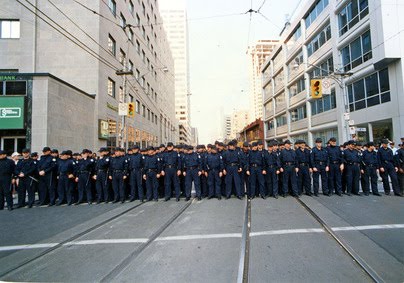 That was obviously before the world went bat shit crazy post 9/11.

The article goes on to say:

The Rogers Centre, where the games are normally held, is virtually next door to the Convention Centre, and will almost certainly be encompassed in the security zone that is always set up to protect world leaders at summits. So discussions are underway to move at least one of the games, sources said.

From what I can see the security perimeter for an event of this magnitude is generally 3 to 5 city blocks.  That means no vehicle traffic, restricted pedestrian access and a FUCK LOAD of cops.  I doubt they will even let the Go Trains run.  This thing is going to make a Tamil Tiger protest look like a pussy cat.  ;)


I can throw a baseball and probably hit The SkyDome from the MTCC on the fly.  There is absolutely no way  we play these games as scheduled and even if we did, would you voluntarily subject yourself to the supreme clusterfuck that will be that summer weekend in the city of Toronto?

A quick snapshot of the teams schedules indicate we play the Tribe in Cleveland on the Monday following this series and the Phillies play the Reds in Cincinnati.  So Sunday would be get away day for both teams.

I sat down a while ago and attempted to predict when, if at all, Doc would pitch in the 3 game set.  This is what I came up with:

By my calculation if Doc goes every five days, the only date in question is the Phillies off day June 14th. If he goes on four days rest he will face the Red Sucks in Fenway and miss the Jays. If he gets pushed back, he will face the Evil Empire in the Zoo and then pitch the opener Friday June 25th at 7:07.

I don't want to be anywhere near Toronto that weekend.  Neither do you.  I want to see Doc pitch.  As do you.  What are the Jays going to do to help us?  No way they walk away from this guaranteed sell out game(s) and the gate/concession/merchandise money it would generate without a fight.  But you have to figure the Federal Government is going to win this arm wrestling match with ease.  So what's going to happen to the much anticipated weekend series?

Posted by The Man With The Golden Arm at 3:15 AM