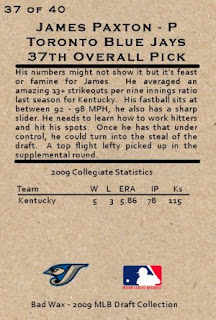 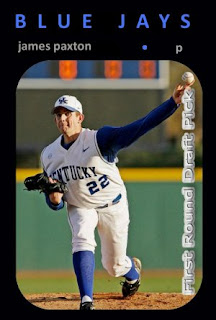 Last month, I briefly touched on the clusterfuck that was the 2009 Amateur Draft and the resulting fall out, specifically the Paxton Affair.

On Friday January 15th Paxton lost his bid to retain his eligibility for the 2010 college season which begins on February 19th.  In court he said: "I'm uncomfortable with feeling the NCAA makes their own rules and has my life in their hands." 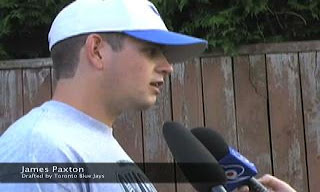 NEWSFLASH: the NCAA does make their own rules.  You can download a copy for free.  And you violated one of them by letting Boras work directly on your deal with Beeston.  Now you pay the price.

If / when these high priced lawyer tricks work, the University of Kentucky will be forced to make a difficult decision.  If they let Paxton play, they risk having the whole season erased from the record books at a later date by the NCAA for rules violations.  If they do not let him play, they lose their best pitcher, get sued and probably don't win many games.

If I was one of his teammates, I would be pissed either way.  I think that Paxton needs to think about them a little bit more instead of only himself.  But based on his comments above, I doubt that they have even entered his mind.

Paxton’s attorney, Richard Johnson, wrote in an email to media the next night that “We have a right to an immediate and accelerated appeal of the denial of the injunction, and we are considering this and other options at the moment.”

Expect to hear more updates soon, this shitshow is far from over.