1 : to cherish a desire with anticipation(hopes)

1 : to desire with expectation of obtainment

2 : to expect with confidence

Kind of fitting when discussing the starting rotation. When it comes to hope and your 2010 Toronto Blue Jays that GM AA is assembling, I’ve thrown most of my hope towards the starting rotation army of all 12 of them. Yes that’s right, as it stands right now, the mighty Cito has 12 guys to make up his rotation. At this point he can have a pre and post all star break rotation. Which might be exactly what we need, as I write this we’ve got so many guys that are going to be on innings watch or coming back from injuries, most of our guys probably won’t be able to make it all season. I just grabbed Jordan Bastian's picks from his blog on who he thinks might be the starting 5.

I like the names for the most part, I'd change one, but I'd totally change the order.
Let's dig into this and take a closer look.

Then we’ve got David Purcey, Brian Tallet and Casey Janssen as other candidates.

Most of the guys that are on the innings watch list are very young and management will probably want to keep a close eye on them as they’ll never have pitched the amount of innings that’ll be needed of them before. Hell with Doc gone, a lot pitchers are going to have to do a lot more then ever before. Somebody wake up the bullpen, they don’t get every 5th day off anymore. But back to the starters, let’s look at my starting 5.

From the all star break last year, all I kept hearing was that we have Shaun Marcum coming back “soon” and he got hyped up to the point he was going to be our savior. Ummm, did I slip into a coma and miss a season or two? He’s good, but he’s going to have to get a hell of a lot better, with a career high in wins with 12, that’s just not going to cut it this year. That being said I just don’t see how Marcum isn’t on the hill April 5th in Texas . Out of this group, he’s got the most experience and I just don’t see who else could pitch game 1 of what could be a very, very long season. 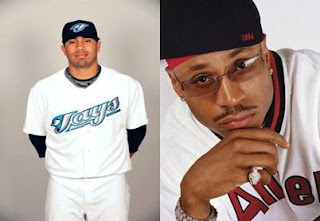 Ricky, as soon as Halladay was traded it was apparently common knowledge to all sports reporters that Ricky don’t call me LL Romero was going to be leading the charge for this rotation. How in the holy hell can that be? Here we have a kid, who most people questioned being picked 6th I might add, who is 25 and has pitched 1 year in the bigs and we expect him to lead this rotation. He might have the best stuff but that doesn’t mean he should be the leader of the rotation.

Brandon 2.0 , in reading about this kid after we traded one of half of the tattoo twins to get him; he’s supposed to have some great stuff. It’s just unfortunate that Seattle jerked around with him and messed him up. I’m glad to hear AA has stepped up and said he’s going to be a starter for us. I say pencil him in at number 3 and let him work his way up if he’s got the stuff people think he has.

Slots 4 and 5 are where things start to get really interesting. In 4 I’ll pencil in Rzpczynski, we didn’t see much of this kid, but of what I saw I liked. He had a good start to his pro career after posting some very good numbers in the minors. Let’s see what he can do over the year. The 5 spot; Cito being Cito, I have to expect that somehow Scott Richmond will get penciled in here. I’m not sure how the f Cito throws this guy out there every 5th day. Don’t we have kids waiting in the wings with much, much better stuff? I’m torn on this one, I’d like to see what Janssen can really do, but I think he’s a much better pitcher in the pen. Do we throw in Brian Porno Set Extra Tallet? To wrap up my “dream” rotation, I’m throwing in Robert Ray into the fire. It’s more then likely going to be a long season of 162 this year, I say throw the kids in and lets see what we got. What do we have to lose? The GM has already said that we’re not playing for this year. 2010 for these Jays is going to be the longest spring training schedule in history. Every young kid we got needs to get a chance and needs to get a lengthy chance. Do you hear me Cito? Don’t put a kid in there twice and decide he’s shit and throw Richmond back in his spot. Give these kids a chance to show us something. For f’ sakes Cito, these kids will be on this team long after you’re kicked up stairs to collect your money to watch baseball.

Don't get me wrong, I love the fact that we've got a small army of players in the starting position. We all know that Cito is going to burn through a lot of these young arms. Then we got the cursed training staff who seemed to bust a starting pitcher every few weeks last season. At least we've got plenty of options to go along with that bucket of hope.

I'm not telling you anything most of you don't already know. I'm just trying to dig through the mid rotation guys to put a starting rotation together. Let the prediction game begin, it's the only game we've got until spring training starts. Who do you have in your starting 5?

Posted by Nemesis Enforcer at 8:27 PM