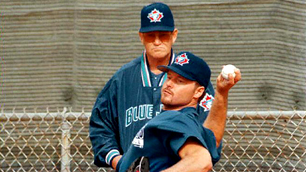 
Melvin Douglas Queen currently holds the title of senior adviser of player development with your Toronto Blue Jays. Boy Wonder promoted him in late October of last year. Prior to that, under J.P. Ricciardi, Mel was on a "special-projects" contract. He was assigned on a case-by-case basis to work with specific minor-league pitchers. Basically a roving Minor League coach.

In the past, Mel held a variety of titles within the organization. He served as the pitching coach from 1996-99 and even replaced The Cito as interim manager for the last five games of the 1997 MLB season. He was also the farm director and a special assignment scout during his time with the Blue Jays.

His most notable work as a coach has got to be his complete overhaul of Doc as a pitcher in 2001. Click here for an epic post by the team over at Mop Up Duty. Rock solid stuff right there.

Our boy Jesse caught up with the man last year for an interview. In it, they discuss a wide range of topics and some of the highlights include:


Click here for Mel's career stats as a player.
Posted by The Man With The Golden Arm at 3:01 AM