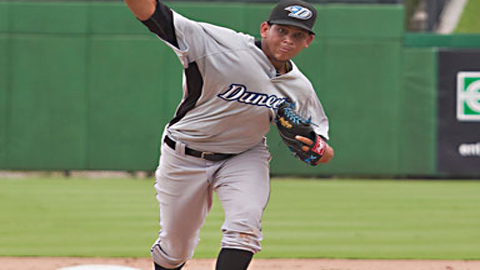 Henderson Javier Alvarez was signed as a non-drafted free agent in 2006 at 16 years old out of Venezuela. This year he participated in the MLB XM Futures Game during the All Star weekend at Angel Stadium in Anaheim, for the World Team. He was also named to the Florida State League 1st half All-Star team, and was ranked as the #5 prospect in the Toronto Blue Jays organization for the 2010 season by Baseball America.

File this tidbit under the good news catergory, according to Bobby Elliott:

Jays tell RHP Zach Stewart, one of top arms in system along with Henderson Alvarez: "Be prepared to start or pitch in relief next spring."

@dustinparkes They told Stewart be ready for either or, not Alvarez

@PdashOW Stewart was told be ready for either or. Mentioned Alvarez as one of the top starters, along with Stewart

Our boy Jesse caught up with Henderson in 2009. They talk about the honor of being an opening day starter, his favorite pitch - the change up - and his story about signing a contract with your Toronto Blue Jays.

Posted by The Man With The Golden Arm at 1:02 AM