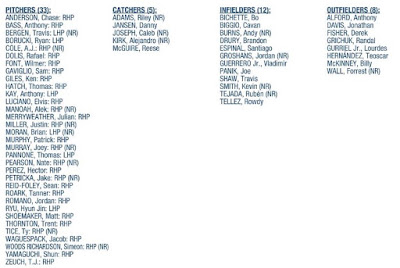 Christ it's already not up to date!

Who’s up for some crazy town? We were going to just bang the 26 Man Roster Challenge this year and be done with it, but you have to give the people what they want.

So we will forge ahead into the unknown, heavy on the gas pedal but with a foot hovering over the brakes, throwing caution to the wind so to speak. Your Toronto Blue Jays will attempt to field a 30 man roster in just over three weeks time, so let’s all try to guess what that will look like.

Normally this would be the part of the post where we list a whole bunch of rules and tiebreaker criteria and prizes, but that’s not really how the summer camp will proceed. The boys just landed in Toronto and the second wave of players are scheduled for a Saturday arrival.

Since there are no fake games that will be played it’s going to be pretty hard to use that as our tiebreaker. So fuck the tiebreaker. Just pick 30 names and your ballot is valid. We assume there will probably be a tie between contestants but what can you really do at this point?

In the spirit of small sample sizes and arbitrary end points the deadline to submit your ballot will be July 20th at midnight because why shouldn’t it be? That gives us all time to see who failed the “physical” and such. Keep an eye on that restricted list.

All previous ballots submitted are null and void, so if you had one in the Challenge from before please resubmit 30 fresh names.

Ya right, good luck with that. It’s all on the table this time around…..6 man rotations, 10 plus man bullpens, carrying 3 catchers, 6 man OF and on and on it goes. I’m sure there are a few players out of options or on minor league deals that will probably sneak in the opening day roster for a week until Big Nate finishes his adventure exploring the mountains but this entire MLB season will be a shitshow so don’t blame us if your pick gets fucked by service time or illness or injury or opts out of playing this year or whatever the hell else you can conjure up.

The owners are really poor all of a sudden, don’t ya know?

And with that we’re ready to rock, good luck to all that join in on the fun and if by some miracle there is an outright winner, we will hook them up with something Jays related as a prize. If you are interested in rolling the dice you have the following ways to get your ballot in.


3.       Add your ballot to the comments section of this post, or in the reminder(s) we post later.